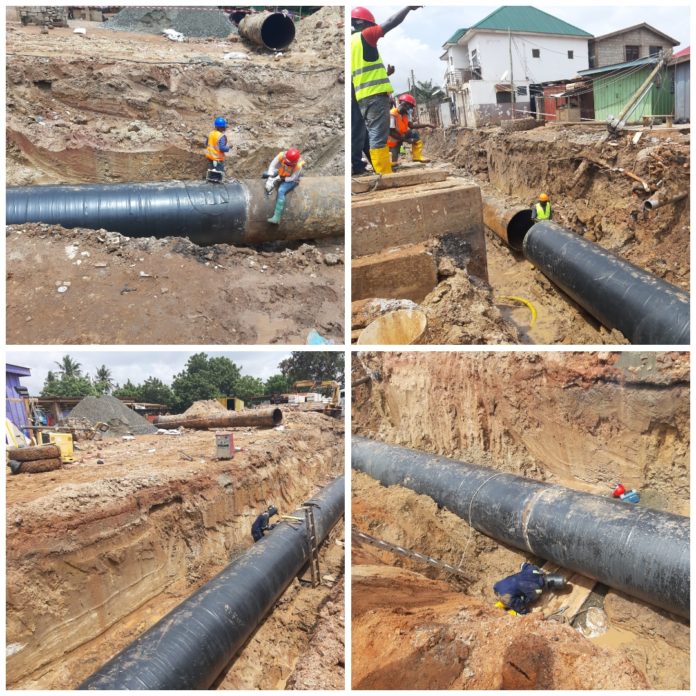 The Ghana Water Company Limited (GWCL) is repairing portions of its biggest transmission pipeline to be completed within a week.

The GWCL is spending four million Ghana Cedis to replace 120 metres length of the 42-inch diameter damaged transmission pipe-line that transmit water from Kpong to Eastern part of the Greater Accra Region.

Residents in affected areas in the eastern part of Accra were asked by the GWCL to store water ahead of the works.

Mr Charles A. Brobbey, Regional Chief Manager, ATMA Production Region of the GWCL, revealed this to the media when officials of the company inspected the ongoing works.

Mr Brobbey said the about 50 years old pipe-line had been giving way, resulting in the causing in the loss of huge volumes of water daily which had drained it financially and supply to customers.

He added that the entire 43 kilometre stretch transmission pipe-lines from Kpong to Tema would be done in pieces as and when funds were available, explaining that the current portion being changed was the worst affected area.

He indicated that they were using coated steel pipe-line to replace the old lines to ensure that it withstood the corrosive and aggressive nature of the soil.

Mr Brobbey cautioned people against building on the transmission line saying “it is like a pipe, if you build on it and there is a problem it your building can come down”.

He said his outfit would to pull down structures to make way for repairs.

Mr Stanley Martey, GWCL Communications Manager, said all needed logistics and personnel were put in place before the commencement of work therefore it was their hope to complete the work within four days devoid of any unforeseen circumstances such as the rains.

Mr Martey said they would immediately start production after completion of work adding that it would however take some time for the water to run through the transmission lines for water to reach clients.

The Ghana News Agency observed that work was earnestly being done by engineers who were seen welding the pipe-lines together.