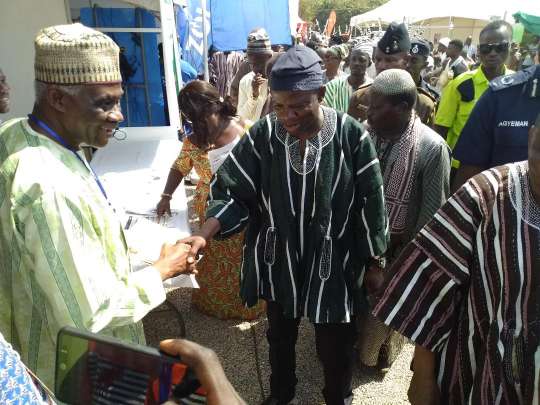 An economic assessment by the Forum for Agricultural Research in Africa (FARA) showed that the country stood to gain GHȼ 230 million annually if she adopted the nitrogen efficient rice as the crop was drought resistant and utilized its nitrogen from the atmosphere making it to do well.

Dr. Paul Boadu, Research Associate at FARA, who gave economic analysis of both crops, said “We observe that most of the rice produced in the country is lowland rice but due to climate change and effects of drought, they are not able to do well but the nitrogen efficient rice is actually a highland rice that does well in lowland areas as well.”

He was interacting with journalists as part of the Agric Fair held in Tamale, the Northern Regional Capital.

His interaction with the journalists was facilitated by Open Forum on Agricultural Biotechnology in Africa (OFAB), which is one of the institutions that have their produce, products and activities on display at the Agric Fair.

Dr. Boadu said adopting this rice would offer a lot of benefits to farmers as their incomes would improve whiles consumers also stood to gain as prices would reduce making them save money.

Statistics shows that annual rice imports cost the country about a billion dollars hence the need to adopt the new variety to salvage the situation.

Dr. Boadu also spoke about the biological resistance cowpea saying “The net benefit assessment of the crop also shows that the country stands to gain about GHȼ 578 million every year if the variety is adopted by farmers.”
He said “Farmers usually spray about nine times before harvesting cowpea but the new variety is able to resist insects and pests such that they do not affect it so adopting it means a reduction in production cost leading to a reduction in prices that farmers sell the produce.”

Professor Walter Alhassan, Former Director General of CSIR said both varieties were good to revolutionize the country’s agricultural sector urging government to adopt them as part of the Planting for Food and Jobs programme to help boost food production and nutrition of the people.