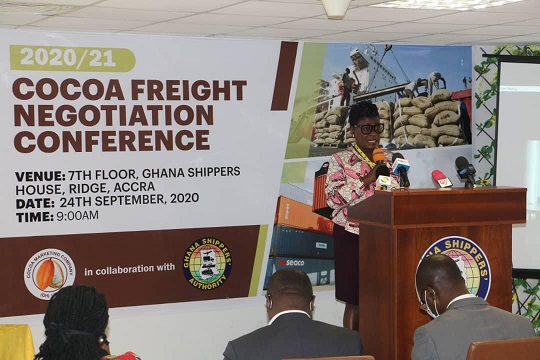 The 2020/2021 Cocoa Freight Negotiations opened in Accra on Thursday with the Ghana Shippers’ Authority assuring of its determination to negotiate competitive freight rates for ferrying Ghana’s cocoa to the international markets.

The Cocoa Freight Negotiations, an annual event organised by industry players, is taking place in Ghana for the second time.

Speaking at the opening ceremony in Accra on Thursday, Ms Benonita Bismarck, the Chief Executive of GSA, said the stakeholders would consider some factors including global freight and Bunker rates before fixing cocoa freight rates that would be mutually acceptable by all.

She noted that some shipping lines had already submitted proposals on the cocoa freight rates, however, there would be one-on-one dialogue to ensure that the freight rates was in the national interest.

“We shall ensure a cost-effective way to buy and ship Ghana’s cocoa and shipping lines are obliged to comply by the freight rates when we agree on it,” Ms Bismarck added.
.

Due to the pandemic, she said, Ghana’s Transport Minister, Kwaku Ofori Asiama brought up an appeal on behalf of the government for shipping lines to waive off demurrage charges, which were agreed by the shipping lines to ameliorate the suffering of importers.

Mr Vincent Okyere Akomea, the Managing Director of Cocoa Marketing Company, in his opening remarks, said the freight negotiations provided an opportunity for stakeholders in the shipping industry to deepen relationships for their mutual interest.

He provided statistics on volumes of cocoa beans carried from the various terminals across the country last year, and challenges identified for amicable resolution.

Despite the large volumes of cocoa shipped from the Western Region, he said, only two or three container shipping vessels loaded cocoa beans from the region, and encouraged more shipping lines to extend their services to the region.

On challenges, Mr Akomea identified delays in the expected time of arrival of vessels, inadequate containers to stuff cocoa from some terminals and delays in releasing bills of laden and, thus, called for collective efforts to resolve them.

Mr Akomea anticipated that the country’s cocoa export would increase from 500,000 to 700,000 tonnes this year because all cocoa terminals had been fully equipped with Reach Stackers and forklifts to facilitate effective operations.

He believed that an “all-inclusive” freight rates would compensate for the challenges identified and boost the country’s cocoa export.

The new cocoa freight rates would be announced at the end of the conference today, Thursday, September 24, 2020.