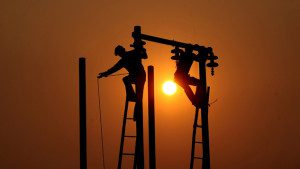 He said for the past 15 years, utility companies had accumulated a lot of debt making them financial vulnerable and without such measures, needed services could dwindle in the coming years. “The trend has choked the credit lines of the utility companies that they cannot even go to any bank to deal with those debts”, he said.

President Mahama, who was delivering his third consecutive news conference to mark his assumption of office, said although the measures were quite austere it would in the end create more jobs as such companies would expand as a result of cash-in flows.

The event was attended by over 100 journalists from the public, private and international media, where the President explained some of the decisions government over the years.

President Mahama said in spite of the 27 percent increase in fuel prices, it was still 11 percent below the de-regulation point.

He said other taxes were to be given to the road fund to pay contractors who would in turn create more jobs for the youth.

The President said under the indiginization policy of his administration, most of the contracts would be given to the local contractors who had the capacity to execute the jobs and employ many more artisans in the country.

President Mahama said although there were no clear-cut figures to depict the level of unemployment in the country, government through the Ghana Statistical Service, was collaborating with the World Bank to track the unemployment rates in the country.

On power, President Mahama said, Ghana was now sufficient in power generation and would in the coming years concentrate on acquiring adequate gas that would feed various plants to supply the country and become a net exporter of the commodity.

He said because of the erratic supply of gas from the West African Gas Pipeline, government was negotiating to acquire some back-up supplies from Qatar to place a final lid on load management in the coming years.

President Mahama said government was also streamlining measures to absorb all teachers and nurses who have not received their placements after their courses.

He explained that government had to stop the payment of allowances to the Colleges of Education because they had gained the tertiary status and, therefore, could source loans from the Ghana Loans Trust just like their counterparts in the universities and polytechnics.