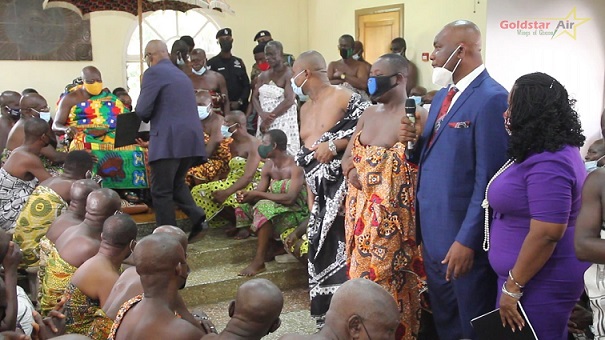 Wholly owned Ghanaian carrier, Goldstar Air, Executive Chairman/CEO Mr Eric Bannerman together with his team has paid a courtesy call on the occupant of the golden stool, His Majesty Otumfuo Osei Tutu II on and bestowed an honour on him at a ceremony in his plush Manhyia Palace conference room.

The Ghanaian airline presented a Citation of Honour to the King of Asanteman His Majesty Otumfuo Osei Tutu II in commemorating the 20th Anniversary on his Enthronement and the 16th occupant of the golden stool.

Mr. Eric Bannerman presenting the plaque read the commemorative inscription or words which recognizes the bold, proactive, and decisive and remarkable leadership skills of the Asantehene for putting the Asanteman Kingdom on the world map.

The Executive Chairman said the honour represents the company’s love to him for ensconcing himself as one of the most revered monarchs in the world and further declared that the decision to honour His Majesty Otumfuo Osei Tutu II stems from his overwhelmingly successful headship, direction and great achievements in accelerating Asanteman’s steps forward at an unprecedented pace.

Mr. Eric Bannerman touting the rock-solid achievements of the occupant of the golden stool and Asantehene reckoned that when you talk about Asanteman today, His Majesty’s eyes light up and he swells with pride of the progress Asanteman is making.

It is on the basis of these achievements that Goldstar Air came to bestow on him this honour by naming one of our aircrafts after him.

2022 Edition Of Africa CEO Forum To Be Held In Abidjan

Goldstar Air aims at increasing number of tourists in Ghana