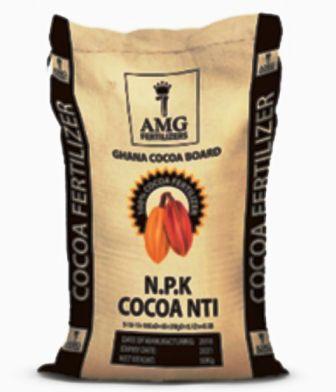 A new fertilizer, that comes with nutrients for regenerating aged cocoa farms has been introduced to farmers.

It has been branded “Cocoa Nti” and meant to help significantly boost crop yield and returns.

The fertilizer, a product of Agricultural Manufacturing Group (AMG), is reported to have the added advantage of reducing fungal diseases by strengthening and maintaining the integrity of the cell walls of the cocoa pods.

Mr. Henry Otoo-Mensah, the General Manager of the Company, told the Ghana News Agency (GNA) that, “unlike many conventional fertilizers, ‘Cocoa Nti’ is designed to generate money for the Ghanaian cocoa farmer by ensuring the production and sustainability of fruits on the cocoa tree”.

He added that “the annual budget on fungicides and other diseases will be cut down drastically”.

When applied, “all dying twigs and branches would be rejuvenated and set up for flower production and fruit set”.

Cocobod in last March reported that the nation might only produce around 700,000 tonnes of cocoa this season, down from the initial forecast of 850,000 tonnes, due to poor rains during the main crop harvest.

The introduction of the fertilizer could be the game changer – raise Ghana’s cocoa production.