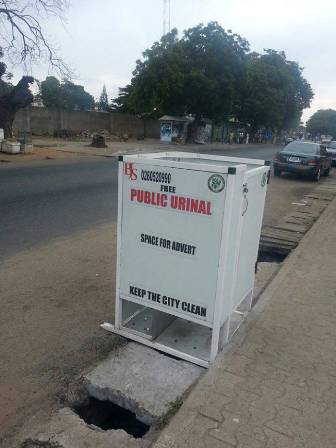 A manufacturing company, JBS Industries may be pioneering Ghana?s first innovation to curb the spread of Cholera in country.

The technology, first in sub-Saharan Africa is an aluminum public urinal with anti-germ properties which was first introduced by the company in 2013 in some selected communities including Dansoman and Korle-Bu.

According to the Managing Director of JBS Industries, Rev. Joseph Botchway, the facility was introduced to help solve the inconvenience commuters especially those in Accra go through in finding a proper and hygienic place to urinate.

?Bad hygienic condition is the cause of the spread of Cholera in Accra. The aluminum urinal which does not breed germs will help curb the spread [of cholera] since it will be located at vantage points such as bus stops, chop bars. Beer bars pubs and so on. There wouldn?t be indiscriminate urinating anymore? he said.

Since July this year, 5000 cholera cases with 45 deaths have been recorded in the Greater Accra region alone. This situation according to health experts is worrying but may be worse should the poor sanitation condition in Accra persist.

The many interventions aimed at tackling the outbreak of Cholera in the country have primarily focused on the effects rather than the underlining causes of which open defecation and urination is highly ranked.

With JBS?s facility which is directly installed over drains, commuters can easily walk in and urinate without paying a fee. By this, there are no incentives or push factors towards open and indiscriminate public urination. Underground water is not polluted and there is no contamination of agricultural produce or the spread of diseases such as diarrhea, ascaris, tapeworms, intestinal parasites, hookworm, hepatitis? among others.

According to Rev. Botchway, the areas earmarked to receive the facilities have been identified as those that unfortunately lack places of convenience to serve Ghanaians who find themselves there.

The facility, aside serving as a place of convenience, will enable the Accra Metropolitan Assembly (AMA) identify and take taxes from chop bars and beer bar operators.