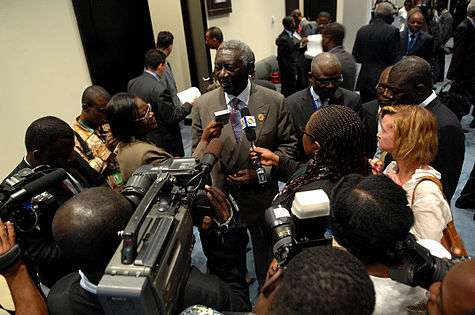 Gradually, the state of journalism in Ghana is loosing its ‘grind, substance, credibility and relevancy’ per my observations and this is because I usually do not get the intent and motive behind the stories they publish through the print and electronic media.

The news headlines that take the front pages of our newspapers are full of propaganda and jokes and the pressing issues that need the immediate attention of the people are printed in small fonts at screw side of the newspapers and not giving the needed attention. I used to hear that ‘Ghana has never been a serious country’ but I never believed until my personal observation of the recent happenings in the country’s media houses affirmed the notion.

The country is full of comedy of errors as William Shakespeare will say. There are so many things going on in this country that needs attention else the progress we hope to achieve as a nation will forever be a nightmare! Our media houses in Ghana need to be blamed for these unfortunate happenings. I understand bad news sells in reportage but however this does not give room to the tolerance of certain ‘stupidities’ as seen in the media.

So many people are doing serious stuff to push the country forward but such people will never be given the needed platform to exhibit their talents in the various media houses.

On the other hand, those who have ‘nothing to offer’ in terms of issues that will help in the development of this country are given airtime freely on national and private televisions and all the media houses inclusive to display their ignorance. Why on earth should our media houses give attention to people like ‘

‘ and the craziest among all that I still don’t understand is a certain ‘hoar’ called ‘Rashida black beauty’. With these happenings, why must we sit down and look?

A critical look at the issues that the Ghanaian media houses give attention or better still are interested in reporting devalue the integrity of the profession. It’s rather unfortunate on the part of Kofi Adomah Nwanwani of Multimedia and Kofi TV’s fame and Viasat One television to spent airtime, interviewing someone like Rashida black beauty and even go to the extent to nominate her for an award over the expense of issues concerning national development! If people who show nudity and say things anyhow become popular easily in Ghana, then I believe strongly that a time will come when education in the country will be of no use and majority of our ladies will surely resort to that attitude as well just like the attitude of this Rashida in question.

On the 19th of February, 2016 an interview between Deloris Frimpong Manso popularly known as Delay granted Moesha Boduong clearly showed that, apart from showing her nudity, she has ‘nothing good to offer’ anybody in this life. Meanwhile, these are the very people who will be given the needed recognition or better still attention in the media dispensation.

After doing all these, the same media personnel will come back and criticise the government over low standard of living and development but they have forgotten the resources they wasted on tackling irrelevant issues that were of no use.

Another thing our media houses are doing of late is the extent at which they give room to unqualified people to share their views on economic and political issues in our country. I can’t understand why Akua Donkor, must be called to express her view on issues after Dr. Bawumia came out with his economic figures and analysis and to the extent of asking her of measures to solve the ‘dumsor’. What expert power does she have? I call this ‘charismatic witchcraft’.

How can we reduce politics to the lowest level for everybody to have a say that do not make any impact on the economy. To what a hell must our media houses give Akua Donkor the opportunity in our national television and radio stations to say things that do not touch a single life? After doing all these, you come back to request a television licence from Ghanaians. Truly, the Christian Book according to Ecclesiastes chapter 10 verses 5-7 says it all. Similarly, how reasonable it is for our media houses to call Okudzeto Ablakwa, John Oti Bless, Johnson Asiedu Nketia, Bernard Antwi Bosiako a.k.a Chairman Wontumi and others to probe on issues regarding inflation rate over the expense of Senior political lecturers at KNUST, University of Ghana or University of Education and people of economic and fiscal policy ideas?

The record must be set straight. It’s high time our journalist must be serious to address pertinent issues because they’ve the platform at hand. Remember, journalist represent the voice of the voiceless!

Not forgotten the ‘charlatan’ and ‘sycophant’ self-acclaimed Rev Counsellor George Lutherodt. This man has managed to manoeuvre his ways through with some unrealistic marriage utterances in the name of counselling by the help of media hype. Meanwhile, there’s no single testimony about a broke marriage he has been able to resolve in Ghana. This man jumps from one media house to the other condemning Ghanaian youth and their sex life. He talks as if the whole world was at his fingertips when he started life as an adolescent. I do not blame him that much because, our media houses made it possible.

Ghana is blessed with young and creative youths pushing very hard to touch lives, but they are less talked about. We have young entrepreneurs like Sangu Delle (Founder of African Development Initiative and a graduate from Harvard), Ato Ulzen-Appiah (Founder of Ghana Think Foundation), Deborah Ahenkorah (CEO of Golden Baobab), Albert Kusi (Founder OF LEC Holdings), Farida Bedwei (A disabled Software Engineer), Regina Agyare (Software Developer), Adowarim Lugu-Zuri (A 20year old founder of Wazuri) and many others will never be given the chance at our national television to showcase their works. They are sidelined and ignoramus minds are entertained. But when someone starts to show his or her pornographic pictures, then he/she is all over the place.

People like Lord Paper and Ewurama, Rashida black beauty, Wanlov Da Kubolor, Moesha Bodoung, and others of the same calibre who have nothing good to offer Ghanaians but showcase their nudities will be the talk of town across all our media. With this attitude in our media houses encouraging pornographies and mediocrity, how can we develop as a nation? Believe me; the problems we are facing are not as are result of the doings of our politicians but rather the journalist of the various media houses who are the prime cause of our retrogression, because of their habit of praising and awarding mediocrity in the country.