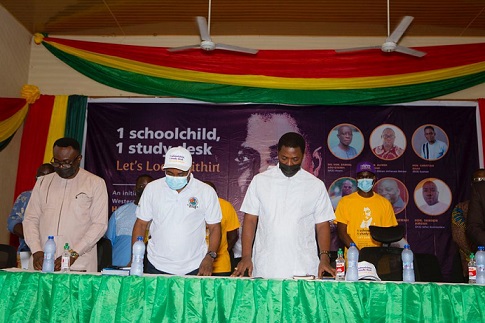 He called on the municipal and district chief executives in the area to play a critical role by soliciting funds to support the initiative to give everyone a chance to education.

Mr Obeng said education was one of the topmost priorities of President Nana Akufo-Addo and, as a Regional Minister, he would not deviate from that.

“We will work to ensure that every student in the Region has access to furniture irrespective of his or location,” he said.

The Minister said during a tour of schools in the Region, he observed the lack of furniture was a major defect in the education system, hence the initiative.

All the nine municipal and district assemblies pledged between Gh50,000 and Gh100,000 to support the initiative.

Mr Oscar Ofori Larbi, the Member of Parliament for Aowin, commended the Regional Minister and his team for the bold decision to help improve teaching and learning in the area and pledged Ghc20,000 to support the project.

Mr Stephen Kwaku Owusu, the Western North Regional Director of Education, said: “Government is doing well and must be highly commended for the introduction of educational reforms such as Teacher Professionalism, Standard Base Core at the Kingdergaten to Primary six Ievel and the Common Core Programme at the Junior and Senior High school levels aimed at improving education.”

He emphasised that spacing played a pivotal role in education and efforts to get furniture for schools must be supported by all.

Mr Owusu said the Western North Region had a deficit of 76,000 desks and that the Regional Education Directorate needed a total of 7,971 hexagonal desks at the Kingdagaten level, 15,000 dual desks at the lower primary, 33,021 at upper primary and 17,900 at the junior high school.

He stated that the lack of furniture had led to low enrollment and teaching and learning, especially at the basic level, and called on stakeholders to support the initiative in order to improve upon education.