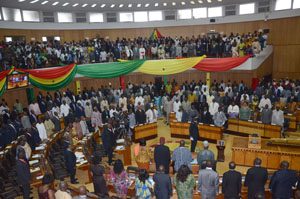 The Director of the Parliamentary Center in Africa, Dr. Rasheed Dramani is asking  Ghana?s Parliament to provide with intepreters to enable MPs communicate in local languages of their choice.

Reports from the House indicate that some MPs  struggle to effectively communicate in the English language.

MP for Wa East, Ameen Salifu?s embarrassing moment on the floor yesterday has sparked debate about the quality of the MPs in the House.

Mr. Salifu whose parliamentary profile shows he has two masters degrees on Tuesday struggled to make a coherent comment on the president?s State of the Nation?s address.

During a debate on the president?s address,  Mr.   Ameen Salifu said ?Mr. Speaker, I want to congratulate the president for his wonderful delivery of his station of nation address ? In fact development nation is worth emulating? Mr. Speaker, when President Mahama came, every district was virtually under school trees? But he has it accessibility, affordability and now infrastructure{sic}.?

Some have said MPs should be allowed to communicate in local languages of their choice. Currently Parliament does not have interpreters and all MPs communicate in English language.

Speaking on the Citi Breakfast Show, Dr. Dramani suggested MPs with special challenges should communicate in their local languages and  Parliament should hire translators for them.

He mentioned that Parliamentarians in Swaziland are allowed to speak their local language if they are unable to express themselves in English.

He however indicated that Ghana?s Parliament currently does not have the facilities to support discussions, debates and submission in the local languages.

?As it is right now, I think we can safely say we don?t have the facilities or the structures to support this,? Dr. Dramani noted.