Sub Lieutenant George Acquah of the Ghana Navy has presented the Award he received from the Royal Majesty Queen Elizabeth II of England, to the Chief of Naval Staff (CNS), Rear Admiral Peter Kofi Faidoo. 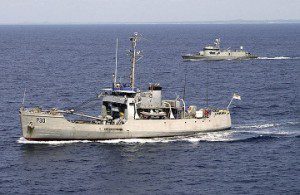 A statement signed by Commander M. A Larbi, on behalf of the Director of Public Relations of the Ghana Armed Forces (GAF) and copied to Ghana News Agency has indicated.

The statement said the ceremony was held at the Naval Headquarters in Burma Camp on Tuesday April 25, 2017.

The statement said Sub Lieutenant Acquah was presented with the Award (Telescope) by His Royal Highness Duke of York, Prince Andrew II on behalf of the Queen during the Lord High Admiral’s Division Parade on April 12, 2017, at Britannia Royal Naval College Dartmouth in the United Kingdom.

It said he was awarded for successfully completing the training and emerging the best amongst all the International Officer Cadets for the Naval Officers’ Training Course, held from May 2 to December 15, 2017, at the College in Dartmouth.

It said the CNS congratulated him and urged him on, adding that the Award was an honour to the Ghana Navy and the GAF as a whole.

He also advised him not to rest on his oars but justify the recognition given him through hard work and also exhibit positive moral attitude and develop the ability to work with various people.

Sub Lieutenant Acquah commissioned as part of the Regular Career Course 54 from the Ghana Military Academy on October 17 2014.

He becomes the latest in a long time of the Ghana Navy Officers to have successfully completed their training and won Awards with the Royal Navy.

In a citation accompanying the Award, he was described as “an officer who exudes a natural calmness, confidence and leadership style and who is academically outstanding with a natural affinity for life at sea and an example for all.