A special delegation of security operatives on Monday left Accra for Dubai in connection with the arrest of the Chief Executive Officer (CEO) of Menzgold Ghana Limited, Nana Appiah Mensah, popularly known as NAM1, in Dubai, the United Arab Emirates (UAE).

Other members of the delegation will leave Accra today to gather first-hand information regarding the arrest by Emirati authorities.

According to a highly placed security source, the delegation was billed to engage the Emirati authorities.

Meanwhile, the Ghana Police Service has confirmed the arrest of Nana Mensah in Dubai and has assured the public that due process will be followed.

A statement signed by the Director-General of the Public Affairs Directorate, Assistant Commissioner of Police (ACP) Mr David Eklu, and issued in Accra yesterday said NAM1 was arrested about five weeks ago by the Dubai Police.

NAM1, according to the statement, was arrested in Dubai to facilitate investigations into suspicions that he had been involved in a gold trading deal gone bad within the Emirati jurisdiction.

It said the Ghana Police Service triggered an Interpol alert on Wednesday, January 9, 2019, to facilitate a search for NAM1 globally after it confirmed reports that an arrest warrant had been issued for NAM 1 and two other directors of Menzgold Limited on charges of defrauding by false pretences.

The two directors are Rose Tetteh, his wife, and Benedicta Appiah, his sister.

The arrest warrant followed reports by customers of the company to the effect that they had been defrauded.

On Sunday, January 13, 2019, the statement indicated, Ghanaian officials in Dubai were informed by Emirati officials that they had already arrested NAM l as of December 7, 2018, in line with investigation into a gold trading deal within the Emirate jurisdiction.

Ghanaian officials in Dubai, the Ghana Police Administration said, had since visited NAM I in the custody of Dubai Police.

On January 9, 2018, the Criminal Investigations Department (CID) said it had triggered INTERPOL processes in 194 countries for Nana Appiah’s arrest.
It was suspected at that time that he was hiding in either Nigeria or South Africa.

The Director-General of the CID, Deputy Commissioner of Police (DCOP) Mrs Maame Yaa Tiwaa Addo-Danquah, who spoke to the Daily Graphic, was certain Nana Appiah would be arrested from wherever he was hiding and handed over to the CID in Ghana, as all member states of INTERPOL had been issued the red alert as part of a manhunt for him.

She said investigations into allegations against NAM1 commenced in December last year, building a prima facie ground prior to an arrest.

Although she was not categorical about the charges that would be proffered against him, she said currently, the CID was looking into the charges of money laundering, defrauding by false pretences, among others.

Nana Appiah Mensah is a businessman who shot to prominence in 2017 after his association with Ghana’s creative arts industry with his Zylofon Media Company Limited.

Before his venture into the entertainment industry with Zylofon Media Company Limited, he operated gold dealership firm Menzgold Ghana Limited.

He is married to Rose Appiah Mensah who is the CEO of Rozzy’s Collection, a fashion shop in Accra. They have a son together.

In 2017, Menzgold came under fire from two regulators, the Bank of Ghana and the Securities and Exchange Commission (SEC), which fire intensified last year.

The SEC, in a notice published in the Monday, October 2, 2018 edition of the Daily Graphic, informed the public that Menzgold Ghana Limited had “neither been licensed nor its adverts sanctioned by the Securities and Exchange Commission (SEC) to carry out any activity in the capital market”.

According to the notice, Menzgold was not a SEC-regulated entity because its operations contravened Section 3 (c) of the Securities Industries Act, 2016 (Act 929) which dealt with the registration, licensing, authorisation and regulation of entities in the securities market.

The SEC notice followed on the heels of a similar statement by the BoG cautioning the public against depositing money with Menzgold because it had not been licensed to take deposits, in breach of Section 6 (1) of the Banks and Specialised Deposit-Taking Institutions Act, 2016 (Act 930).

However, Nana Appiah Mensah called the bluff of the BoG, describing the statement as a joke and a diversionary tactic.

Later, the SEC directed Menzgold to suspend its gold trading operations with the public.

According to the SEC, Menzgold had been dealing in the purchase and deposit of gold collectables from the public and issuing contracts with guaranteed returns to clients, without a valid licence from the commission.

Despite initial protests, Menzgold complied with the directive. It, however, failed to fully pay its numerous customers whose investments fell due, a situation which later blossomed into series of protests, including a major one that hit Kumasi last Tuesday, to demand government’s intervention to retrieve their investments collectively running into billions of Ghana cedis. 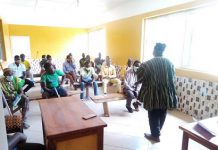