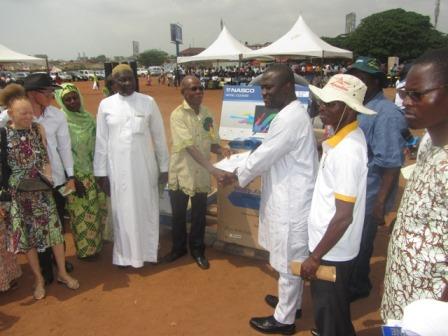 Mr Mohammed Adjei Sowah, the Accra Metropolitan Chief Executive has urged the youth to take up agriculture as a serious profession to earn a living.

He said technical training in animal husbandry would soon be started by the government and urged the youth to take advantage of it to set up livestock ventures.

Mr Sowah gave the advice in an address during the AMA Best Farmer Award on the theme: “Growing Food and Jobs” in Accra.

He said canoe fishermen in Accra would be registered to ensure equity in distribution of premix fuel as well as weeding out unscrupulous ones in the fishing business.

Mr Sowah called on the fishermen to eschew selfishness and partisanship in the handling of the premix fuel which had the tendency of bringing division among them and assured the farmers that government would continue to support them and congratulated the award winners for their feat.

Mr Maxwell Odonkor, the Accra Metropolitan Director of Agriculture in a speech said backyard gardens and rabbit production were being vigorously promoted with a number of demonstration farms in Accra.

He said over 1,500 jobs were expected to be created in agricultural sector of Accra by next year through the planting for food and jobs programme.

Mr Odonkor said the construction of storage facilities by government at the various landing beaches for fishermen was at slow pace and called for serious attention to be given to the initiative.
GNA/Newsghana.com.gh