Deputy Minister of Local Government and Rural Development, Nana Adjei Boateng, has pledged the government’s resolve to go the extra mile to build a society that works not just for few privileged Ghanaians but everybody. 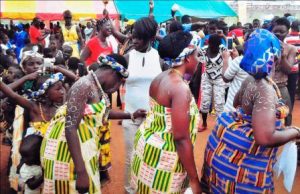 He said it was not going to let the people down – betray their trust and confidence.

Addressing a grand durbar of the chiefs and people of the New Juaben traditional area held in Koforidua to climax their Akwantukese festival, he said the Nana Akufo-Addo-led Administration would keep faith with them.

The event coincided with the 25th anniversary of the installation of the Omanhene, Daasebre Oti Boateng.

The Deputy Minister called for the people to give strong backing to the government as it worked hard to implement its development agenda – free senior high school (SHS) policy, one district, one factory, planting for food and jobs and the construction of warehouses.

He gave the assurance that every election promise they made to the people would be kept.

He said it was in the best interest of everybody and the economy that these businesses flourished – to create jobs and wealth.

He spoke of the readiness of his Group to assist in the implementation of the government’s one district, one factory policy.

Daasebre Oti Boateng drew attention to the need for the universities to re-align their programmes to fit the demands of industry.

Their products should be globally competitive, resourceful and innovative to drive the nation’s development.
GNA/Newsgahana.com.gh