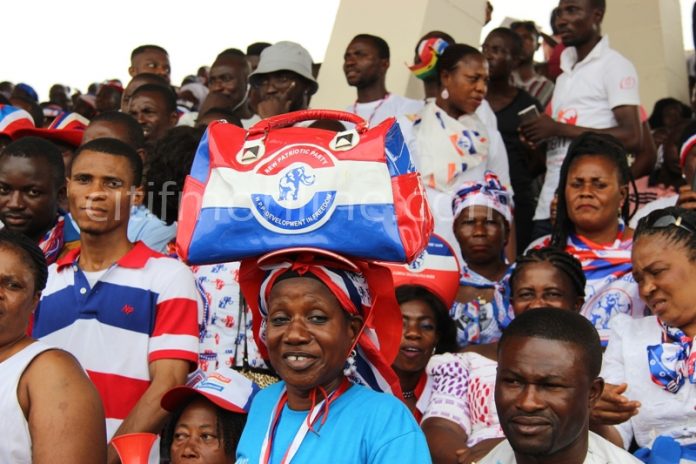 Some with fitting hats to match carried the symbol of the NPP, the elephant, on their heads. Another gentleman with his peculiar style hid inside a cloth designed in a form of an elephant this attracted a lot of attention.

Some NPP faithful also painted their bodies with the NPP colours and carried pots with smoke emanating from them on their heads.

They displayed exciting dancing movements to the admiration of the large crowd who had gathered at the Square to witness the investiture of Nana Akufo-Addo as president.

Many NPP youth groups who came from all parts of the country wore the party’s T-shirts with various inscriptions including: ’Change has come’’, ‘’Change is Coming’ ’Nana Nti’’, Hwen Ewuradzi Ennim’’ and ‘’Working for the cause of Ghana’.

Charles Akosa Pimpong from Ama Saman, told the Ghana News Agency that God had rewarded Nana Akufo-Addo with the presidency for his patience and tolerance.

He said Nana Akufo-Addo’s political opponents over the years have tried to demonise his character with unsubstantiated allegations and God knows that he has not done any of those allegations so at the right time, he has rewarded him for his patience.

Many of the excited spectators blew vuvuzelas and made loud noises, especially when Nana Akufo-Addo and Dr Mahamudu Bawumia were ushered into the ceremonial ground and before and after they took their Oaths of Office.

Government thanks Ghanaians for ensuring a befitting funeral for Rawlings