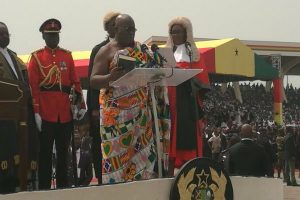 Many of them said they were pleased with President Akufo-Addo’s pledge to protect the public purse, with the caution that public service was not an avenue for looting money, and promised to support any interventions to ensure financial discipline and make corruption unattractive.

Mr Emmanuel Arthur, from Takoradi in the Western Region, said discipline was one a major means of ensuring the success of every activity.

He expressed the hope that President Akufo-Addo would put his foot down and step on people’s toes to ensure that discipline remained the hallmark of his Government.

Mr Arthur noted that the failure of every President and Government depended on the conduct of the appointees and their competence to deliver without fear and favour.

Alhaji Mohammed Iddrisu, from the Upper East Region, said he was confident that President Akufo-Addo would deliver on his campaign promises and the commitments in his inaugural in his Inaugural Speech.

He said President Akufo-Addo was noted for his passion to fight corruption and injustice; therefore, his efforts to tackle and reduce corruption in his government would succeed.

Alhaji Iddrisu said Ghana would continue to be the beacon of hope for Africa and the President’s speech had raised the flag of the country even higher.

Mr Kojo Appiah from the Central Region said the speech gave him goose bumps because it brilliantly diagnosed the “national sickness and prescribed the antidotes in an interesting manner.”

He said irrespective of your political ideology, you could find an issue that would make you feel like supporting the efforts to become a better Ghanaian to build a better nation.

“After nearly 60 years of our independence, our story should have been better, so this is the time for us to use patriotism to drive the development agenda,” he said.