Vice President Dr Mahamudu Bawumia has assured Ghanaians in Diaspora that the Government was committed to making Ghana the most preferred destination and business-friendly economy on the African continent. 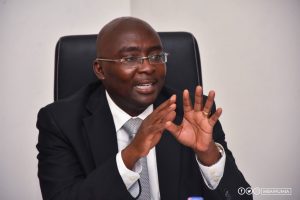 The Vice President and Minister of Finance emphasised Government’s plans to increase revenue by deleting ghost workers from the payroll system, lowering taxes and addressing the energy crisis as well as creating a conducive environment for investment.

The meeting with the Ghanaians in Diaspora was held at the Ghana High Commission Office.

The event capped a week of high profile meetings by the Ghanaian delegation including senior government officials who traveled to London and Washington, D.C. to present the Government’s roadmap for revitalising Ghana’s economy.

The delegation consistently expressed Government’s determination to control the country’s debt and get Ghana working again.

The delegation included the Senior Minister, the Minister of Finance, the Governor of the Central Bank, the Chairman of the Finance Committee, the Chief Executive of the Ghana Petroleum Corporation and the President’s Advisor for Media and Special Projects.

The team traveled to London and Washington, to meet with investors, bond holders, government officials, Ghanaians in Diaspora, and other key stakeholders.

It also participated in 2017 Spring Meetings of the World Bank and the International Monetary Fund.

The trip comes on the heels of the Government’s first budget, which anchored on the New Patriotic Party’s campaign promises such as free Senior High School, one million dollar development fund to each of the 275 constituencies, as well as expanding agricultural investments to create jobs for the youth.

Throughout the meetings and public events, some investors and the international community expressed concerns about Ghana’s debt profile.

The delegation stated that the Nana Akufo-Addo’s Administration was determined to restructure the country’s existing debt by moving from the current short term, high interest loans to longer term, and lower interest loans that would save the Ghanaian tax payers’ money.

International investors expressed their confidence in the government’s debt management strategy and cited the issuance of the $2.25 billion bond, which was issued in cedi denomination but purchased in dollars.

The bond is part of the re-profiling of the country’s debt to replace the more expensive debt management strategy being used in the past. .

The delegation would depart Washington for New York, where they will continue to meet with investors, bond holders and members of the Diaspora.

They will return to Accra on Tuesday.