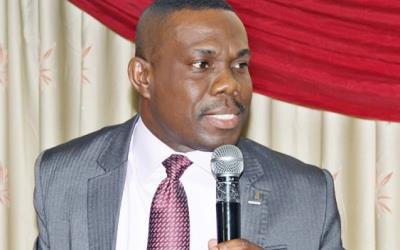 Expressing his disappointment over the low turnout at the just ended district level elections, he explained that there were four people who are very important when it comes to democracy and development; which are the Unit Committee member, the assembly member, the Member of Parliament and the President.

“If you are not interested in getting good leaders to represent you in these four categories, development will delay, so people must be interested”, he advised.

He said it was not just enough to vote for members of the Unit Committee and Assembly Members, but “after you have voted, hold them accountable and make sure that they deliver.

“Let them appreciate the fact that you have voted for them and you will be watching their activities closely and ensure that they will bring development to the people.

Dr Osae said people should also be interested in what the assemblies do, because they collect their moneys in the form of taxes meant for developing their areas.

“Be an active citizens and not a passive citizen”, he said.

Explaining the work of the Assembly member, Dr Osae said the assembly member is like a local Parliamentarian who represent the entire electoral area at the District Assembly level.

“He is a facilitator of development, who listens to people and under the law, he is expected to consult his people before attending to assembly meetings so that he will know their needs.

“He puts the needs of his people on the table at the Assembly meeting
“The Assembly member is expected to make by-laws for the proper management of the assembly’s areas of jurisdictions as well as to help in working with the people to increase revenue for the development of the areas”.

He said once elected, if any assembly member was seen not to perform to the satisfaction of his or her people, the people could recall him or her, through the petitioning of the Electoral Commissioner who would arrange for a new assembly member.

The Unit Committee members and Unit members are the first points of call when there were developmental issues, he said, adding, “they are “our messengers and the people who carry our messages to the assembly on our behalf.

He said technically, assembly members do not have common funds to carry out developmental projects, but they lobby and facilitate development so people should not have a higher expectations that an assembly member is coming to construct a school.

He said all assembly members are resourced with motor bikes to serve their communities and to attend meetings while sitting and transport allowances are given to them when they attend assembly meetings.