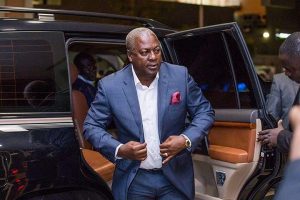 The aL-hAJJ can authoritatively confirm, barring any act of God, Ghana’s immediate past President, John Dramani Mahama will stake claim to the opposition National Democratic Congress’ vacant flag bearer position ahead of Presidential elections in 2020.

Though his immediate family had earlier kicked against calls on him to lead the NDC again, they are said to have softened their stands after some party kingpins gave compelling reasons why Mr Mahama must contest.

This decision was taken at a marathon family meeting, also, attended by some senior and influential capos of the NDC during which it was agreed that it would be in the supreme interest of the biggest opposition party and Ghana; if the former President is “supported” to contest the 2020 elections on the ticket of the now opposition party, reliable sources at the meeting told The aL-hAJJ.

According to one source, it came out clearly at the meeting that, while majority of the rank and file of the NDC, including even some of those presently jostling to become flag bearers on the ticket of the party are unanimous; Mr Mahama is the safe bet for the 2020 presidential polls, they are however concern with the former President’s leadership style which they insist must change.

“It is not in doubt that the rank and file of the NDC including, party bigwigs are in favour of a John’s comeback…even the flag bearer hopefuls know this and are willing to step down for him if he is ready to change his style of doing things. They think his leadership style did not encourage inclusiveness and if he is to be endorsed to run again, he must be ready to change,” the source revealed.

Key among some of the issues they believe the former President should be ready to work on, according to the source was “John’s handling of party-government relation. To them, the NDC of Rawlings and Atta Mills was different from the NDC of Mahama. As you know, the NDC thrives on consultation and consensus but, under Mahama, many party bigwigs were marginalized, so were the grassroots and this, they said, led to our miserable defeat. So they want him to work on some of these things.”

John Mahama’s immediate family had earlier counseled the former Bole-Bamboi legislator not to yield to pressure to lead the party into the next presidential election.

“John has given his all in politics to NDC and Ghana and we think it is just fair that we allow him to rest. We were very supportive and instrumental in convincing him to partner late Prof Mills, and when the time came for him to contest for President, we supported him and advised him to go for it…now we have again advised him not to make a comeback in 2020,” a junior brother of the former President and Chief Executive Officer of Engineers and Planners, Mr Ibrahim Mahama told some select group of senior journalists in January this year.

However, the former President himself has since been economical on whether he will lead the NDC again. In April this year, he told a meeting of the National Executive of NDC that, he was counting on divine intervention to help him decide on his political future.

“Whether I will contest or not is in the hands of God,” John Mahama noted.

In the meantime, a former deputy Minister of Power and one time spokesperson of the ex-president, John Jinapor, has been reported saying Mr Mahama is not hell-bent on returning to power.

He insists though, the former President is the best bet for NDC; Mr. Jinapor disclosed that “He [Mahama] is so much concerned about the NDC. It is not about his personal interest and I am being frank with you. President Mahama is not fixated in becoming president at all cost. What he wants is the best for this country. And that from the conversation I had with him his preoccupation is to build the party; his preoccupation is to ensure that the party structures, the party’s foundation is solid”. Mr. Jinapor noted.

However, and perhaps, it is the belief of many, including some kingpins of the umbrella party and the Mahama family that, with current happenings in the country, especially since President Akufo-Addo was handed power; it will be of great disservice to the people of Ghana and the biggest opposition party if Mr John Mahama is not “allowed” to lead the party into the next polls.

If the former President Mahama gets the nod to the lead the NDC into the 2020 election and eventually wins, he will become the first President in the history of Ghana to have lost an election but, succeeds in recapturing power within four years.

Mr Mahama’s second coming, this paper has gathered, is the last thing functionaries and strategists of the ruling New Patriotic Party wants to hear. “They (NPP) believe Mahama will pose major threat to their continue stay in power after the 2020 elections so they don’t want him to lead the NDC into the 2020 elections,” a party insider told this paper.

The aL-hAJJ had earlier reported that former President Mahama has confided in close associates and some party heavyweights, including some of his trusted appointees that he was likely to make a comeback. They say, John Mahama is highly convinced President Akufo-Addo will not be able to fulfill his mouthwatering campaign promises to meet the expectations of Ghanaians.

The former President himself believes it will not be long for Ghanaians whose expectations was heightened by the then Candidate and now President Akufo-Addo’s sugarcoated promises, to come to terms with the reality that they were hoodwinked into voting for Nana Akufo Addo and the NPP.

Explaining why he lost last year’s election at the World Economic Forum in Durban, South Africa recently, Mr Mahama stated “I knew what the economy could give the people and I told the people the truth that we need more hard work to be able to get out of where we are; my opponent promised heaven and you have the constraints of not being able to promise all the rosy things he was doing…the people made a choice and voted me out. It is part of the learning process for all of us. If he [President Nana Akufo-Addo] is able to deliver on his promises, good; if he is not able to, the people would have learnt that not all that glitters is gold”.

In the meantime, some leading members of the NDC have been jostling to step into the shoes of the former President. Some of the flag bearer hopefuls however, have been telling their confidants that they will only go the full hog if Mr Mahama decides not to make a comeback.

Member of Parliament for Tamale Central, Alhaji Inusah Fuseini has explained that a lot of NDC kingpins have expressed interest in leading the party because the four month old Akufo-Addo government is failing.

The former Roads and Highways Minister noted that members of the NDC had observed policy incoherence and backtracking on the part of the government which is proof that the “NPP might leave power so soon.”

But political watchers including Managing Editor of the New Crusading Guide, Abdul Malik Kweku and Chief Executive of State Transport Corporation, Nana Akomea, have all tipped former President Mahama to whip any of the NDC flag bearer hopefuls at congress.
Stay tuned.