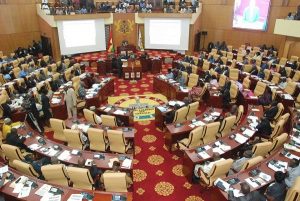 I write to congratulate the Rt. Hon. Speaker and members of the 7th Parliament under the Fourth Republican Constitution for their election and assumption of office resulting from the 7th December 2016 Presidential and General Elections. Unlike previous elections in the annals of our history the pivotal and critical issues were between electing a corrupt, bankrupt, inept, incompetent, abusive, impudent, and Looter incumbent Government, and electing one of the contesting candidates dedicated to fighting all these unconstitutional capricious evils and protecting the national purse.

The massive thrashing of the incumbent Looter Government of John Dramani Mahama (may God never give Ghana a corrupt and looter President like him again) by the President, Nana Akufo Addo and the New Patriotic Party, is a clear expression of the sovereign will of Ghanaians for accountability, transparency and fairness in governance to all citizens without fear or favour. The people voted against patronage, cronyism, ethnicity, and political party cryptocracy in bringing the President and the 7th Parliament into office

Ghanaians therefore expect, and demand a total brake with the immediate past practices of the parliaments which were reduced into appendages of the executive chariot in looting the national purse. Ghanaians have demanded and expect that the mandate of the 7th Parliament will be consistent with the letter and spirit of the 1992 Constitution; and the promises by the President to protect the national purse and be impartial in the governance of our dear country. The promises of the President upon whose steam of anti-corruption agenda the NPP in Parliament had such a beautiful majority meets Citizens Vigilance for Justice’s agenda of putting Ghana First. I dare say that the reasonable number of members of Parliament returned and voted to the 7th Parliament was the result of the electorate’s perception of their ability to put Ghana First in holding the executive to account.

The expectations of Ghanaians that the President and the 7th Parliament would for the first time since 2009 indeed render selfless service to the people of Ghana and not champion their corrupt self-interest and their political party’s myopic corrupt self-interest was demonstrated by the events that unfolded on Friday 6th January 2017 at the concluding deliberations of the Sixth Parliament under the Fourth Republican Constitution, 1992. That incident put beyond any argument the overwhelming conviction by patriotic Ghanaians that the Sixth Legislature had become a mere rubber stamp of the executive contrary to the letter and spirit of the Constitution that made it a watch dog of the national interest.

The partisanship, cronyism, patronage, ethnicity, and endemic corruption of the Looter Governments of the Fifth and Sixth Governments of the Fourth Republic had been allowed by the majority to infect the fabric and conduct of Legislative business in the House. Corruption became endemically pervasive in the Fifth and Sixth Parliaments because of the deliberate acts of infection by the Presidents and Governments whose members made up the majority in those Parliaments. The whole body polity consequently became infected with the pandemic of corruption and corrupt practices from the Presidency of looting the national purse for private profit.

The messenger, the clerk, executive officer, administrative officer, the Chiefs Director came to believe that the only way of surviving in the service of one’s nation was to support the looting executive branch and their majority in parliament in their looting crusade of the national purse. Honesty and integrity became grounds for transfer of officers of honour and integrity. The Looter Government club could not tolerate citizens with any degree or modicum of honour and integrity.

Nobody better explains and articulates the purposeful and deliberate collusion between the Fifth and Sixth Parliaments and Executives under the Fourth Republican Constitution to set the Constitution asunder than its Minority Leader, the Honourable Osei Kyei Mensah-Bonsu on 6th January 2017. He confirmed the majority and patriotic beliefs of citizens that the majority in Fifth and Sixth Parliaments kowtowed to the Looter Governments of that epoch in such a way that due diligence was not done in the passage and approval of loans and international agreements which were usually passed with alacrity. The then Minority Leader, who has since become the Majority Leader, is reported to have underscored the general belief of the more politically conscious members of the citizenry that: “If Parliament was a bit more diligent in its approval of loans and was more transparent in handling motions parliamentary democracy would have been deepened.”

The then Minority Leader stated the well-known paramount objective of any democratic Parliament to improve the quality of life of citizens. The Fifth and Sixth Parliaments under the Fourth Republican Constitution on the other hand served the interest of the majority members and their looter Governments contrary to their oath as members of parliament. The lame defence of the then Majority Leader that the majority in parliament affiliated to their Looter Governments “tried to balance the interest of the country and that of their party in the discharge of their duties on the floor” only goes to reinforce the fact that the majority in the Fifth and Sixth Parliaments were indeed mere appendages of the executive looter chariot. They abysmally failed their constituents and failed the nation as well. The 1992 Constitution does not enjoin that partisan political party interest which is inconsistent with the letter and spirit of the Constitution should supersede the collective national interest.

The just ended elections make it clear that the electorate will judge the tenure of the Speaker and the members of this 7th Parliament by whether or not the Ministry of Interior, and the Ministry of Justice and Attorney-General’s Department will be compelled again to ask for monetary contributions from the component security, intelligence, and legal agencies to pay extortion money to Committees of Parliament before their budgets will be heard at the yearly budget hearings: and a further amount of GH₵2,000.00 extorted as a condition precedent to laying the committee’s report before the whole House for its deliberations and approval. The payment of extortion money to committees to deliberate upon loan agreements and bills in or outside Accra together with pocket allowances or fuel allowances by Ministries, Department, Agencies (MDA) and even by lobbying Non-Governmental Organizations all engender corruption in the whole body polity as Parliament never approves such expenditures in any MDA’s budget.

The money extorted by Parliamentary Committees and related bodies and individuals under such extortion racketeering from the MDA’s is no small money because even the supporting staff of the committee of Parliament is paid a share of it. And as I found out to my chagrin the staff of MDA’s also used the extortion by Parliament as an excuse to be paid similar allowances for their contribution towards preparing for the budget hearing, and loan or legislative committee discussions. I was proud of the organizations in the Ministry of Justice when they each wrote to say they had no funds to contribute to the extortion money required for the budget hearing as their meager allocations in the previous budget had not even been given them. Regrettably, to avoid disaster for the Ministry one of the Departments with authority to retain a portion of its internally generated funds loaned the administration the extortion money which was paid to the budget committee of the 5th Parliament at the budget hearing of 2011. I was pleasantly amused by the enthusiasm both sides of the house on the committee showed in signing for their extortion money.

The response I received when I reported the two occasions of extortion to the then President was to be consoled by the fact that Parliament had made attempts to extort money from him when he nominated persons for appointment; he added that two of my colleagues even paid to be approved for their ministerial positions. I was shocked because such extortions never took place in the First and Second Parliaments that ended on 7th January 2001 when I was Deputy Attorney General.

May the 7th Parliament not compromise the national interest and purse in approving the likes of such agreements as the Atuabu Free Port Agreement which short changed Ghana simply because the President and another Minister had consummated their selfish interest in unwarranted trips to Mauritius in 2013 and 2014 behind the backs of the people of Ghana. May we not also have the likes of the Africa and Middle East Investment (AMERI) Agreement which prompted the Senior Staff Association of the Volta River Authority (VRA) to gathered the courage for the first time to show their disapproval of and disagreement with the greedy self-interest of the Looter Government against the national interest on 4th January 2017, after the Looter Government that had been voted out of power by the people of Ghana was exiting office in a few days.

The rape of this country by the Looter Government with the active cooperation of the 5th and 6th Parliaments are well known and the welcome disapproval shown publicly by the then Minority Leader, Honourable Osei Kyei Mensah-Bonsu on 6th January 2017 is, therefore, good news and a harbinger of the anticipations for the positive changes to come. Happily, Hon. Mensah-Bonsu who is now the Majority Leader of the 7th Parliament, has the burdensome duty to help the President to pursued any past criminal infractions of the Constitution and laws of Ghana by investigating and dealing with them as the first step to demonstrating commitment to the anti-corruption agenda of the President and his Government, and of Parliament. The nation is looking forward to being assured by the pronouncements and actions of the President and Parliament that looters of whatever status will not be allowed to enjoy their booty freely in Dubai, Mauritius and other safe havens.

I assure every Ghanaian that the evidence of criminal and unconstitutional conduct is overwhelming but unconstitutional attempts are being made through influential chiefs and elders to let bygones be bygones contrary to the demands of the Constitution for accountability, transparency and fairness in governance. May the 7th Parliament and the President remember that even walls have ears and we hear the attempts at trying to compromise the President’s anti-corruption agenda in the name of reconciliation. The President’s anti-corruption drive will be still-born with such compromises and reconciliations.

Now, I wish first of all on this occasion of the first official meeting of the 7th Parliament of the Fourth Republic, after its inauguration, to congratulate the Rt. Hon. Speaker of Parliament upon his election by Parliament to preside over its affairs during its tenure. Mr. Speaker, uphold your status as a pastor of a renowned church and a worthy Spokesperson of God in ensuring that you do not preside over an extortionist and corrupt Parliament as we witnessed in the immediate past in this country in the name of democracy. I also wish to congratulate each Member of Parliament and the membership as a collective on their election by an awakened Ghanaian electorate demanding probity, accountability and transparency in the work of Parliament.

May Ghanaians at the end of this 7th Parliament’s tenure be proud that it has helped to restore the underlying principles and values for which Ghanaians gave to themselves the Fourth Republican Constitution, 1992. May this 7th Parliament always put Ghana First in supporting the President to protect the national purse. Congratulations to the 7th Parliament in which our hopes as citizens are now focused for the delivery of a good democratic accountability that puts Ghana First!