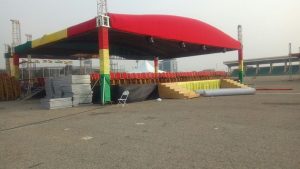 The Independence Square is gradually taking shape for tomorrow’s inauguration of the 5th President of the 4th Republic.

As at press time, the needed arrangements including sound check, stands, canopies, press box among others had been done awaiting a final inspection by the grounds committee of the inaugural ceremony.

Checks at parliament house also revealed that the house of legislature was also readying itself for the event as the 7th Parliament of the fourth republic is set to commence sitting on January 7, 2017.

On Thursday afternoon, the Inspector General of Police John Kudalor and other heads of security establishments visited the venue of the inauguration [Independence Square]  to assess the extent of work and accordingly advise.