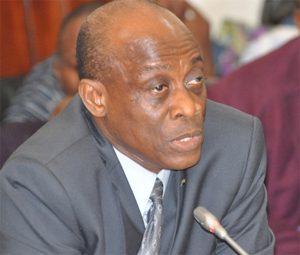 GHANA?s Finance Minister Seth Terkper appears to be playing the blame-game with regard to the worsening economic situation in the country in the recent past, accusing banks and other financial institutions for the rapid depreciation of the Cedi.

According to the minister, speculators and the financial institutions as well as the non-release of grants had contributed to the Cedi?s depreciation which now trades at GH?3.50 to a dollar as against GH?2.20 at the beginning of the year.

Mr Terpker could not however give concrete measures as to how the negative trend would be arrested.

Mr Terkper, who announced this in Parliament in Accra yesterday when he presented the mid-year review of the 2014 Budget Statement and Economic Policy of the Government, said the current debt constituted 54.8 percent of Gross Domestic Product (GDP).

He said the rising debt had been occasioned by the issuance of the Eurobond, disbursements for the Bui Dam, Ghana Gas Project, coastal protection projects and the redevelopment of the Police Hospital in Accra.

Just last week, the Bank of Ghana (BoG) put the nation?s debt at around GH?58 billion.

The Finance Minister also made a request to Parliament to approve supplementary estimates of GH?3,196, 855, 671(GH?3.2 billion) to prop up the original budget estimate of GH?36 billion in the government?s 2014 Budget Statement and Economic Policy.

This comes at a time when the country?s economy continues to suffer serious battering from the free fall of the local currency against major foreign currencies and perceived bad economic policies.

He said the supplementary estimates had become necessary because of ?pressures? which continued to pose serious challenges to the attainment of the 2014 economic targets.

He however warned ministries, departments and agencies (MDAs) as well as metropolitan, municipal and district assemblies (MMDAs) that the supplementary budget would not automatically result in increase in expenditure across board.

He attributed the pressure partly to continuous shortfall in tax and non-tax revenue despite the fact that there had been introduction of certain taxes like Fiscal Stabilisation Levy of five percent of profit tax of institutions in the banking, insurance and other financial services as well as the communications and the brewery sectors, Special Import Levy and the broadened environmental tax.

The consequential depreciation of the Cedi, according to the Minister, was having a significant effect on economic activities, public expenditure and other macro economic variables, power-sector disruptions arising from year-long shortage in gas supply from the West African Gas Pipeline.

The minister said there was drastic shortfall in revenue resulting in fiscal deficit of 10.1 percent of Gross Domestic Product (GDP) as against budget target of nine percent.

On Ghana?s petroleum industry, the Minister said an amount of $410.4 million had been received by the government in the first half of this year resulting from the 18th and 19th crude oil liftings while additional $152 million was received in respect of corporate income tax, royalties from the Saltpond Field, surface rentals and returns on undistributed funds in the Petroleum Holding Fund.

According to the minister, out of the total of $562.5million received, the government gave a total of $112.5million to the Ghana National Petroleum Company (GNPC) for its operations.

He said Gross International Reserves of the country dwindled from $5.3 billion as at the end of December 2013 to $4.5 billion as at June 2014 which would be able to provide two and half months import cover for the country.

The minister said for the country to cope with the rising cost of petroleum products in the country, it had to build its capacity to be able to refine its crude oil locally.

He acknowledged the fact that the recent increase in fuel prices had brought hardship to many Ghanaians, stressing that the increase had been disruptive for the average Ghanaian and similarly affected effective planning by the business community.

He said to assuage the suffering of the vulnerable in the face of a removal of subsidies on petroleum products, the government would pursue alternative options in the public transport area where 450 new buses were being imported for that purpose.

Meanwhile, the government has admitted that the $3billion Chinese Development Bank (CDB) loan has come under serious challenges as forewarned by the Minority New Patriotic Party (NPP) and it is being repacked with new terms for approval by Parliament.

Debate on the mid-year review and the supplementary budget will start today by parliamentarians with the Minority Leader, Osei-Kyei Mensah-Bonsu promising the Minority group?s readiness to debate the knitty gritty of the budget review.