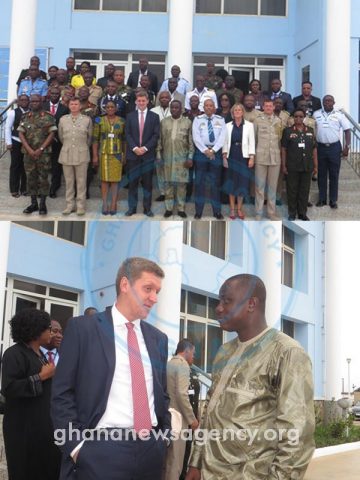 Governance and management of defense and security sectors are essential to the consolidation of democracy in developing and transitional democracies, Mr Dominic Nitiwul, the Minister of Defence, has said.

He said this was essential, especially with regards to issues of efficiency and effectiveness of the security and defense sectors.

Mr Nitiwul said this in his remarks at the opening of the Fifth Edition of the Managing Defence in the Wider Security Context (MDWSC) Course at the Kofi Annan International Peacekeeping Training Centre (KAIPTC) in Accra.

The two-week programme, which is under the auspices of the United Kingdom Government, is being organised by the KAIPTC, in collaboration with the Cranfield University.

It brings together military, civilian and other public agency representatives from Ghana and the West African sub-region.

Mr Nitiwul said all over the world, it was quite evident that there were major differences regarding how defense management issues should be addressed.

He said Ghana had been generally perceived as a stable and peaceful nation in a sub-region plagued by conflicts and political instability; adding; “However, beneath this veneer of peace is the fundamental issue of the role of the security and defence sectors ensuring the continuity of the process”.

Mr Nitiwul noted that the MDWSC Course would perform valuable functions by drawing the minds of participants to a torrent of ideas, information, interpretations and visions pertaining to the identification of appropriate policies, principles and techniques to advance defence and security sector development in Africa.

He, therefore, encouraged the participants to share their professional experiences, engage in stimulating debates and discussions, and expose themselves to the diverse information that would be shared.

“The next two weeks has been carefully planned to equip you adequately to make individual and collective contribution to reforms aimed at restoring professionalism, efficiency and effectiveness of the security and defence sectors to consolidate democracy in developing transitional democracies, especially in Africa,” he said.

Air Vice Marshal Griffiths S. Evans, the Commandant of the KAIPTC, said the MDWSC Course sought to enable participants to contribute to the development, implementation and review of national security and defence policies.

He said the role of the security and defence sector was very fundamental in ensuring peace and stability in the region that had unfortunately been plagued by protracted conflicts and political instability.

“It is heartwarming to see democracies such as Kenya make strides towards maintaining a peaceful nation,” he said.

“However, to ensure the continuity and improvement of this peaceful order, there is the need for reforms aimed at maintaining professionalism, efficiency and effectiveness of the security and defence agencies,” he added.

The Commandant expressed gratitude to the British Government for allocating funds to build capacities needed to manage defence and security in Africa.

Mr Iain Walker, the British High Commissioner to Ghana, said the MDWSC was about exchanging hard won security experiences in many cases of defence and security challenges.

He said the programme would also cover how to manage internal security and terrorists responses.