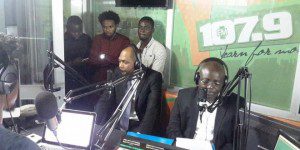 Soon Ghana can boast of having it?s own Hip Pop Award show, as a collaboration between YFM Ghana and 4Syte Tv will see Ghana organize its first ever Ghana Hip Pop and Urban Music Awards. The award show seeks to celebrate the achievements of urban and hip pop based talents and it is expected to be launched in October, 2015. ?We have been talking about this for about four years now. This is an event to reward musicians in the Hip Hop and Urban music categories. I believe YFM being the number urban radio station and 4syte as the number urban TV station for the youth are the best brands to handle this.

?This partnership will reward from the underground to those doing big things. I believe we need more awards in the system  and creating another avenue for them to be recognized is what we are going to do. Today marks the beginning of a great ceremony after all the years of planning, discussions, negotiations.?  Mr Akwesi Agyeman, mentioned during the announcement in the studios of YFM on Wednesday, 29 July, 2015 CEO of 4SYTE Tv added that, the categories will be known when the official launch is done in October.