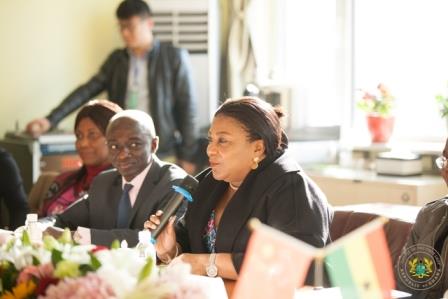 The First Lady, Mrs. Rebecca Akufo-Addo has given the assurance that Chinese investments in Ghana will always be safe.

Speaking at a conference to promote trade relations between Ghana and China at Hunan in the Changsha Province of China, Mrs Akufo-Addo told the investors to have confidence in Ghana and invest in its many sectors of the economy.

She touted Ghana’s credentials as a safe and profitable place for Chinese investors.

The First Lady was addressing the “2017 Ghana-Hunan Economic and Trade Conference” hosted by the China Council for the Promotion of International Trade (CCPIT).

She noted that, Ghana was a “globally acknowledged democracy” which had changed governments successfully since 1992 “without causing any dislocations to the political, economic or social systems of the country.”

Therefore, “all investors are assured of a stable and peaceful country to invest in,” she said.

Mrs. Akufo-Addo explained that Ghana had “an assertive Parliament, an independent judiciary and a vibrant media” and these were “safeguards against unpredictable actions of any one person or government and further serves as security for the protection of investment.”

The First Lady said Ghana, as the second largest ECOWAS economy, was strategically placed to open up new and additional markets to boost their investment, adding that, ECOWAS has a total market of about 500 million people.

She said “Ghana’s acclaimed educational system has ensured that the majority of its work force has the needed skills that industry requires or where those skills do not exist, the workers could be easily trained to become productive.”

She also noted that the country had a generous investor incentive through the Ghana Investment Promotion Centre (GIPC), free zones enterprise and other institutions, adding that “regardless of where the investment was, the government had instituted a number of generous incentives for the investor, depending on the activity or the location of the investment, to ensure that their investment thrived.”

She mentioned other priority areas as the energy sector, especially renewables, as well as infrastructure sector, including roads, the mining industry, salt, gold, bauxite, iron ore, tourism, manufacturing and industry, ICT as well as the financial services sector, especially equity financing, as various options that could be invested in.

Dr. Millicent DeGraft-Johnson, Deputy Head of Macroeconomic Research Unit, Ministry of Finance, in a presentation said the Ghanaian Government’s short to medium-term development programme, was aimed at providing opportunities for growth and job creation through the private sector.

She said the Government had developed concrete reform actions to tackle key challenges to private investment such as ensuring macroeconomic stability and debt sustainability, improving the ease of doing business and enhancing access to affordable and long-term financing and de-risking instruments.

Ghana’s Ambassador to China, Mr Edward Boateng, in a remark said the summit would go a long way to deepen the relationship between Ghana and China as well as facilitate investment into the One-District-One-Factory (1D1F) initiative.

The First Lady later witnessed the signing of a cooperation agreement on Economy and Trade between CCPIT Hunan and the AGI and an Agricultural Cooperation Project between the CRI and the Hunan Hybrid-rice Research Centre.
GNA/Newsghana.com.gh