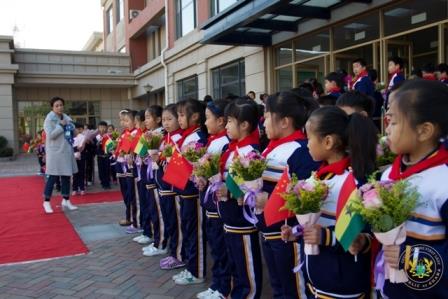 The Rebecca Foundation has signed an agreement with Licang District Experimental School in Qingdao, China, to have an exchange programme between Ghanaian and Chinese school children starting next year.

The programme, which seeks to deepen cultural, academic and sports ties between pupils of the two countries, would allow 10 pupils from the Licang School to visit Ghana while 10 Ghanaian pupils would also visit China every year.

The programme was secured as part of events being undertaking by the First Lady, Mrs Rebecca Akufo-Addo’s official visit to China, and it would enable the children to gain a lot, especially in the area of sports.

It would enable pupils from China to be trained in Ghana’s favorite sporting disciplines, including soccer, while Ghanaian pupils visiting China would also be taught various sports including table tennis.

At the signing ceremony in China, the First Lady, who is also the Founder of the Rebecca Foundation, commended the people of China for their sense of discipline, saying “the exchange programme would help impact some of their values in the participating children.”

Professor Kwesi Yankah, Minister of State in charge of Tertiary Education, who accompanied the First Lady’s team to China, said “through the power of sports, the children who will be participating in the exchange programme will be able to make friends to deepen cultural relations among the two countries.”

The agreement for the programme was signed on behalf of the Rebecca Foundation by Ms. Shirley Laryea from the Office of the First Lady, whiles Mr Wang Xiaoguang, Director General, Education and Sports Bureau of the Licang District signed for the school.

Later, the First Lady met with members of the Ghanaian community in Qingdao area and encouraged them to contribute their knowledge, skills and resources to the development of Ghana

She also gave the assurance that the President, Nana Addo Danquah Akufo-Addo and his team was working hard to steer the country towards sustainable development and prosperity.
GNA/Newsghana.com.gh