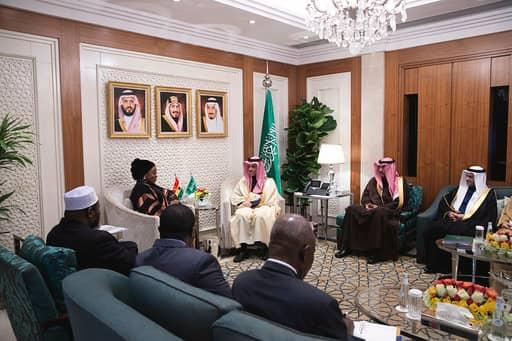 During the meeting the two ministers discussed bilateral relations between Ghana and Saudi Arabia.

The duo, announced that President Nana Addo Dankwa Akufo-Addo would be paying a State visit to the Kingdom of Saudi Arabia from February 7 – 8.

Madam Botchwey, who is the first Ghanaian Foreign Minister to officially visit the Kingdom, said the purpose of the President’s visit was to deepen relationships between the countries.

She expressed her appreciation for the warm reception and courtesies extended to her and her delegation during the visit.

She further extended warm greetings from the President of Ghana, His Excellency Nana Addo Dankwa Akufo-Addo.

“May this visit herald even stronger ties between the Kingdom of Saudi Arabia and the Republic of Ghana for the benefit of both our people.”

She recalled that Ghana and Saudi Arabia have enjoyed cordial bilateral relations which date back to the 1960s and indicate that since then, the bonds of friendship between the two countries have witnessed steady growth.

“Saudi Arabia is Ghana’s oldest bilateral partner in the Gulf Region and that, our relations with Riyadh paved the way for the expansion of our bilateral relations to the rest of the countries in the region,” she stated

“Saudi Arabia, therefore, continues to remain a priority partner for Ghana in the region.”

Honourable Shirley Ayorkor Botchwey also mentioned the appreciation of the Government and People of Ghana for the decision of the Government of Saudi Arabia to donate fifty (50) tons of date fruits to Ghana last year during the Ramadan season and seize the opportunity to thank the authorities for the kind gesture.

She acknowledged that the donation was very symbolic, considering the fact that dates were a national symbol of Saudi Arabia, and also because it was personally from the Custodian of the two Holy Mosques, His Royal Highness, King Abdullah Bin Abdulaziz Al Saud.

She thanked the Government of the Kingdom of Saudi Arabia for their contributions made to vital areas of Ghana’s national development including education, health care, energy, road construction, as well as donations to build mosques, orphanages and provision of safe drinking water in Islamic communities in Ghana.

Honourable Shirley Ayorkor Botchwey further commended the Saudi Government for not only extending scholarships to young Muslim students to study in universities in Saudi Arabia, but also offering through the Islamic Development Bank, annual scholarships to Ghanaian students to undertake courses in Turkish universities in Medicine, Pharmacy, Engineering and Veterinary Science, to enable them contribute meaningfully to Ghana’s development.

On his part, Prince Faisal, who lauded the cordial relationship between the two countries; said the Kingdom was ready to welcome President Nana Addo Dankwa Akufo-Addo for a State visit.

Prince Faisal said outstanding agreements between the two countries should be finalised in other to strengthen the bilateral relations between them.