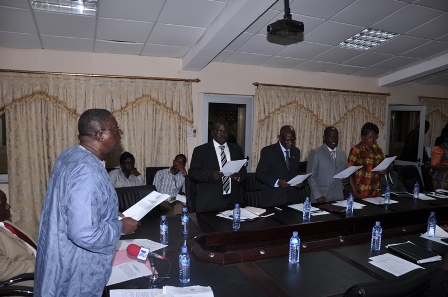 The Employment and Labour Relations Ministry is to investigate the claims of the officicials of the National Labour Commission (NLC) wanting their boss sacked. 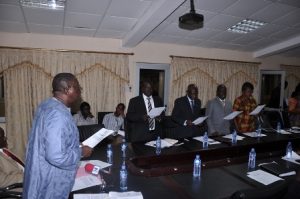 Staff of the NLC are demanding the immediate removal of the Executive Secretary of the Commission, Charles Adongo Bawa Duah.

Information gathered by the Economy Times indicate that the move is in solidarity with two of their colleagues whose appointments have been terminated.

The sector minister, Ignatius Baffour Awuah has told that, his outfit will investigate demands from workers.

It follows an official complaint from the workers and defence by the management, to be presented to the Ministry on Thursday.

“I do not know the gravity of the issues the workers are raising. I have said that when the issue comes before us, it will inform us as to what to do next,” Mr. Baffour Awuah told Citi Business News.

Mr. Charles Adongo Bawa Duah was appointed as the new Executive Secretary of the National Labour Commission (NLC) in April 2016.

His appointment came at a time where the commission was saddled with uneasy calm following the delay in appointing a substantive Executive Secretary.

The workers were agitated by the long period Dr. Bernice Anowa Welbeck served as Acting Executive Secretary of the NLC.

The Senior Industrial Relations Officer at the NLC, Eric Omane Yeboah alleges that the political affiliation of Mr. Bawa Duah with the NDC defeats the independence of the NLC in executing its mandate.

“Most definitely the NLC is a neutral institution and under the public service; all things being equal, public servants are non-partisan and therefore I cannot go and represent a political party and still hold myself in a public office. We are therefore saying that he cannot still remain in office when his government is not in power,” he stated.

Even though the NLC is the body mandated to resolve all labour issues in the country, the Minister has ruled out any significant impact of the workers’ agitation on the Commission’s work.

“I do not think it will affect the cases before the commission; that is why I visited the premises and finally convinced the workers to unlock the offices.”

Mr. Charles Adongo Bawa Duah was appointed as the new Executive Secretary of the National Labour Commission (NLC) in April 2016.

His appointment came at a time where the commission was saddled with uneasy calm following the delay in appointing a substantive Executive Secretary.
The workers were agitated by the long period Dr. Bernice Anowa Welbeck served as Acting Executive Secretary of the NLC.

Meanwhile the Employment Ministry has resolved to update the public with the details of its investigations.

“The NLC is a strategic institution in the country resolving labour issues and that it if it should have a problem at that level, then the public must be made aware in our efforts to address them,” the sector minister said.

In a related news, the National Labour Commission (NLC) has blamed the increasing number of industrial disputes on the limited knowledge of most employees on the provisions of the Labour Act, Act 6511, 2003.

Should employees and employers fully abreast themselves with the requirements of the Act, the Executive Secretary of the commission, Mr Charles Adongo Bawaduah, said industrial dispute would have been minimised and the NLC sparred of some cases.

He said the Act was relatively new compared to other legislations and many also thought that the provisions of the Industrial Relations Act 299 could still be applied.

“We need to do more education and I foresee that the NLC can embark on some education but predominantly, the unions must also take it up and educate their members to appreciate the provisions of the Labour Act,” he said in an interview.

The NLC received a total of 664 complaints last year. Out of the figure, 178 were settled, with 486 of them currently at various levels of settlement at the NLC.

Complaints that go before the commission involve disputes related to dismissals, termination of appointments, retirement benefits/end-of-service and unpaid salaries.

The rest are workmen compensation, redundancy, medical and unfair labour practices and others.

Citing strike actions, Mr Bawaduah said the law had substantially changed but some people still embarked on strike actions without due process.

“It’s either they are not aware or they just don’t care. The employers’ associations also need to carry out some public education for their members and companies. There are those who think that once I own a business, I can hire and fire but the working relationship is governed by law and so it’s important that they have thorough knowledge of the provisions of the law to be able to comply,” he said.

The NLC received 108 complaints of dismissals, 221 of termination, 167 unfair labour practices, 93 of unpaid salaries, 55 cases of redundancy, 13 of retirement benefits/end-of-service, and six of workmen compensation. Also, 12 cases on mediation and strike / lockouts were received, five on intention to embark on strike and three on voluntary arbitration were handled by the NLC.

He deduced that the majority of public sector strike actions were illegal because in most cases they refused to comply with the provisions of the law relating to strike actions because either they had not given notice or even when they gave notice they continued to embark on the strike when negotiations were still ongoing, which was against the law.

“They may be an essential service such as nurses and doctors which the law prohibits from embarking on strike actions yet they go anyway. I don’t think that these persons do not know the provisions of the law; they do know. It’s just that they are of the belief that if they do it, nothing will happen to us,” he said.

Mr Bawaduah said in most cases, the government had not enforced the provisions of the law relating to strike actions.

“You can terminate the employment of such persons or withhold their salaries. If a public sector workers know that even if they go on strike they will still be paid, they will go on strike,” he said.

He said the workers in the private sector were not necessarily satisfied with their conditions of service, but they knew that the law would be applied to the letter and spirit if they embarked on illegality. The same could not be said of the public sector, so enforcement of the law should be taken seriously in the public sector organisations.

The Labour Act 2003, Act 651 was developed to put together existing laws on labour to conform to the 1992 Constitution and the conventions of the International Labour Organisation (ILO) to which Ghana is a signatory.

After wider consultations between the social partners, namely, the government, employers, organised labour and other stakeholders in the labour market, seventeen laws on labour were repealed, with the exception of the Workmen’s Compensation Law 1987, PNDCL 187, and the Factories, Offices and Shops Act, 1970 (Act 328), amendments to Sections 93, 95(1), and 124 of the Children’s Act, 1998 (Act 560).

The Labour Act covers all employers and employees except those in strategic positions such as the Armed Forces, Police Service, Prisons Service and the Security Intelligence Agencies.

Nothing should divide us in Ghana