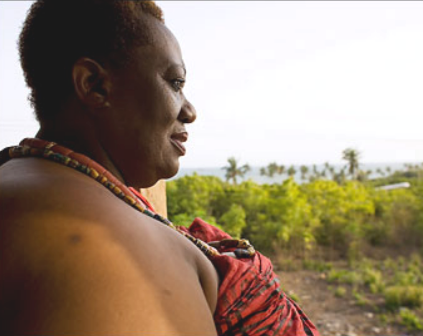 Nana Amuah-Afenyi VI (born 1953), known informally as King Peggy, is the Nana (chief) of the town of Tantum (or Otuam) in the Mfantsiman Municipal District of Ghana.

Born Peggielene Bartels in Ghana and a naturalized citizen of the United States, she has worked as a secretary at the Embassy of Ghana in Washington, D.C. since the 1970s. On March 5, 2014, #TheAfricanDream had the opportunity of speaking with her about how she became king.

We talked about her life before ascending to royalty, what she is presently involved in as far as using her position to positively influence and?develop not just her small village but the entire nation of Ghana. She also expressed how she feels about Ghana as a nation which turned 57 in 2014 since her liberation from British colonial rule on March 6, 1957.
?
Find out?more about King Peggy?and?our conversation with her in the video below:?http://youtu.be/VtmfrgkMN2k
?
Photo: Washington Post
Send your news stories to newsghana101@gmail.com and via WhatsApp on +233 244244807 Follow News Ghana on Google News

Fake chiefs will be seriously dealt with – Greater Accra Minister