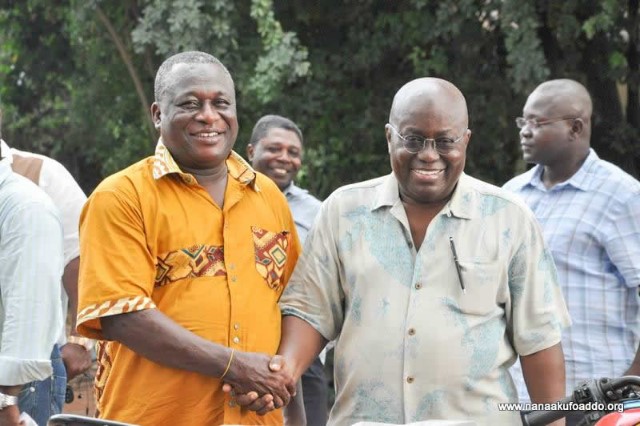 Mr Freddy Blay’s dream of clinching the ruling New Patriotic Party’s National Chairmanship slot with the backing of President Akufo-Addo has suffered a major jolt as credible information reaching The aL-hAJJ indicates that the President has now thrown his weight behind Upper West Regional Chairman, Alhaji Abubakari Abdul-Rahaman for the National Chairman post. 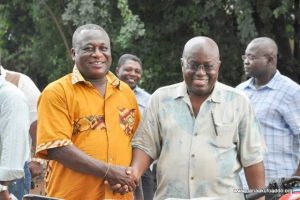 The NPP’s acting Chairman lost his “position” to Alhaji Abdul-Rahaman, popularly known as “Ahaji Short” following what some kingpins of the governing party described as his “marriage of convenience” with the National Democratic Congress ahead of the December 2016 elections.

Mr Blay was made acting National Chairman of the NPP in 2015 following the indefinite suspension of duly-elected National Chairman, Mr Paul Afoko, over accusations of insubordination and alleged dalliance with the then ruling NDC.

Sources told The aL-hAJJ that “days after Mr Blay was made acting Chairman, Nana tasked him to work hard towards our victory in return for maximum support to become the substantive National Chairman at our next congress. But during the campaign, Mr Blay did a lot of things that did not please Nana. His paper, Daily Guide, became one of the leading newspapers that projected President Mahama. This did not go down well with Nana.”
Nana Akufo Addo, the source revealed, became suspicious of Mr Blay “whom he had trusted as the best man to hold the forth towards his dream of becoming president. In fact, Nana fell out with Mr Blay even before the election, and the likes of Alhaji Short, Bugri Naabu, Wontumi and others became Nana’s trusted allies.”

The former 1st deputy Speaker of Parliament and ex-CPP MP for Ellembelle hinted of strain in relationship with President Akufo-Addo days after the election when he revealed that members of the NPP accused him of supporting the NDC after his newspaper accepted to publish adverts of President Mahama during the 2016 campaign.

This was corroborated by his wife, Mrs Gina Blay, who also revealed before the elections that the NPP was unhappy with adverts of then President Mahama’s achievement in the Daily Guide Newspaper which she manages.
Mr Blay’s wife told Bola Ray of Starr Fm that “NPP is very unhappy about the adverts, they are very unhappy about it.”

Akufo Addo’s indignation to Mr Blay’s decision to run Mr Mahama’s adverts in his newspaper, sources revealed, also cost him the Speaker of Parliament job he was promised. The NPP acting Chairman subtly confirmed this when he reacted to the nomination of Prof Mike Ocquaye as Speaker.

Perhaps, having been assured of the Speaker post by then Candidate Akufo Addo, Mr. Blay told the media after the nomination of Prof Mike Ocquaye that; he was confident of becoming the Speaker of Parliament following the NPP’s victory in the 2016 general elections.
“Of course traditionally, when there’s a vacant seat people contest to occupy it. I was hoping to be made the Speaker of Parliament, but I never spoke to the President about it. I wish I had it but I couldn’t have made noise about my wish. I’m currently serving as the Acting National Chairman of the New Patriotic Party (NPP), but if there’s any place that the President wants me to serve which will not affect my job in the party, I will gladly take it up,” he stated.

Having missed out on the Speaker of Parliament post with hopes of President Akufo-Addo backing him to win the National Chairman slot, Mr Blay is said to have been left in the “middle of the sea” with no hopes of playing any meaningful role in the NPP in the foreseeable future.

The choice of Alhaji Short, this paper gathered, is linked to his hard work in the Upper West region which led to the NPP snatching five seats from the main opposition NDC.