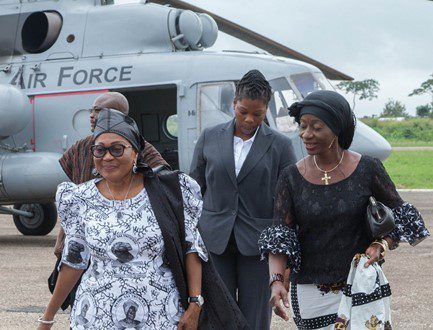 President Mahama and his wife were returning to join the Presidential jet at the Kumasi Airport after returning from the funeral of the chairperson of Council of State Cecilia Johnson?s mother.

Confirming the incident to Citi News Lt. Col Aggrey Quarshie, the Director of Public Relations at the Ghana Armed Forces stated that the pilot?s decision to land the helicopter was because of ?bad weather.?

?There was a storm approaching, so in order to safeguard the first family the pilot decided to embark on a precautionary landing,? he explained.

Lt. Col Aggrey Quarshie added that ?nothing happened to the M17 helicopter and there were no injuries.?

He also told Citi News that armed security men including Police and ?military cordoned off the area where the helicopter landed? and ?the first family was immediately transported by road to Kumasi.?