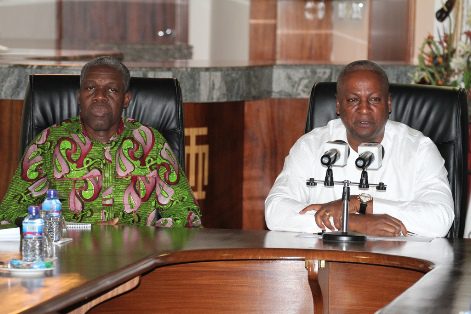 Ghanaian President John Dramani Mahama has declared that the government will not spend out of its stipulated budget in resolving the spate of industrial actions prevailing in the country, local media reported Wednesday. In his first public statement concerning many labor agitations on the country’s health front, President Mahama urged the country’s medical doctors to call off their strike, saying “the government is determined to strictly follow austere measures with regard to the budget” and would not approve any monies outside of it.

“Any agreements that are reached in respect of allowances or conditions of services will have to be appropriately captured in the budget. And I want to say for emphasis, I would not authorize any expenditure on wages and compensations not provided for in the budget.”

Mahama, who was speaking to midwives and other health professionals seven days after the doctors declared a strike over their conditions of service, stated: “Physical discipline requires that not a single pesewa is spent on remuneration outside what has been budgeted for.”

Ghana’s health sector has been caught up in labor agitations and strikes, the latest being the medical doctors who are demanding that the government provide them with documented conditions of service, among other demands.
Three people have died so far within the one week of the doctors’ strike action, which does not allow them to attend to new patients at the country’s hospitals. They have said they will not attend to persons reporting to Out-Patient Wards (OPDs) but will attend to those already admitted.

They have also threatened to resign en masse if government fails to heed to their demands for a documented conditions of service and other issues.

As a result, several public health facilities have been abandoned, shifting the pressure on to private hospitals and clinics as well as the Police and Military hospitals in Accra.

Two weeks ago, 91 junior doctors picketed at the Controller and Accountant Generals Department to demand their 11 months’salary arrears, which the government says it has cleared.

Then followed nurses at the Accra Psychiatric Hospital recently who embarked on a sit-down strike over unpaid salaries.

They however resumed work after Employment and Labor Relations Minister Haruna Iddrisu told them monies had been released for onward payment.

The government also has to deal with unpaid members of the Nurses and Midwives Association of Ghana who have given a five-day ultimatum that ends on Friday.

The main opposition New Patriotic Party (NPP) has described the government as clueless on how to handle the country’s health crisis. Enditem