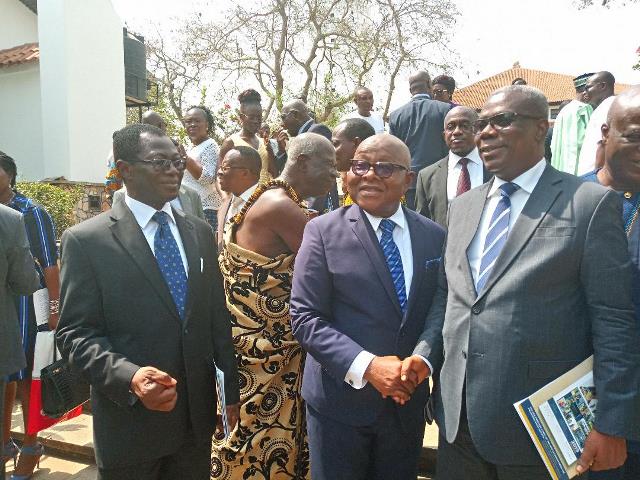 Professor Aaron Mike Oquaye, the Speaker of Parliament, has advocated for a special quota for women’s representation in Parliament and that matters relating to gender were of very much concern to him.

“Today by global standards Ghana is in the last fifth category of women representation in Parliament. And we cannot compare ourselves in any way with Rwanda. Ghanaians deserve better,” he said.

Prof Oquaye said this on Monday at the opening on the 70th Annual New Year School and Conference (ANYSC) at the University of Ghana (UG).

“And even as the Affirmative Action Bill is before Parliament now, I think it is good for us to examine it carefully and come out with ideas as to maximise the political influence of women in our dear nation,” the Speaker said.

“It is my wish that we should have special seats created for women to contest alone, so as to give them opportunity to come to Parliament.”

The 70th ANYSC, on the theme: “Building Strong Institutions for Democratic Consolidation in Ghana,” is being organised by the School of Continuing and Distance Education (SDCE) of the College of Education, University of Ghana, in collaboration with the Ministry of Local Government and Rural Development.

Prof Oquaye urged political parties to also have quotas for women in that regard and advocated that the district assemblies’ one-third of members reserved for the President appointees at a given time be reserved for women.

He said it was important for Ghanaians to examine from time to time the trajectory of their political history and the things that had passed through until this time, adding; “after all the unexamined life is not worth living”.

He said constitutional order was definitely akin to strong institutions and the rule of law.

“We’ve got human rights provisions of unlimited nature, we’ve got provisions for legislative oversight of executive action, which we can say are weak in many ways because Members of Parliament are also members of the executive in many ways,” Prof Oquaye said.

“And for the member to seek not the eye of the Speaker but the eye of the President, in such circumstances, I think it is better for us to reverse to 1979 where you could either be a Member of Parliament or a Minister.”

He noted that the power of the President was too strong, not regarding any particular person but in terms of the constitutional arrangement.

On elections, Prof Oquaye said during an election year prayer camps were often being flooded with people praying to God for peaceful election, which showed that Ghanaians were not sure of their constitutional and other legal arrangements.

“Do we have the best practices by way of electoral laws of our country? I have said and I continue to say that our laws are very porous in this regard,” he said.

“Of cause we would need to examine decentralization and for that matter issues regarding elections; the party system being applied and the influence of money on election generally.”

Prof Atsu Aryee of the Department of Political Science, University of Ghana, who delivered the keynote address, said strong institutions and democratic consolidation were mutually reinforcing.

He said institutions should not only be seen as entities or structures but also as rules, enforcement mechanisms and norms adding that “building strong institutions for democratic consolidation entails reconstructing the Ghanaian state and society to internalize the values of developmental governance capacity”.

Prof Ebenezer Oduro Owusu, the Vice-Chancellor of UG, in a speech read on his behalf, noted that the University continues to make significant efforts to help build stronger institutions in the country and seeks to use the 70th ANYSC celebrations as well as other platforms, to further strengthen these efforts.

Prof Michael Tagoe, the Provost of the College of Education, and Dean of SDCE, UG, said corruption was a threat to Ghana’s democracy.

“Corruption undermines the sanctity of democratic consolidation as it erodes the foundation of trust that individuals have in political leadership and institutions”.

“Corruption becomes a barrier to sustainable development when precious resources are mismanaged, and funds are diverted into private pockets.”

Prof Yaw Twumasi, the Chairman of the UG Governing Council, who chaired the function, lauded the role of the ANYSC in Ghana’s socioeconomic development over the past 70 years.