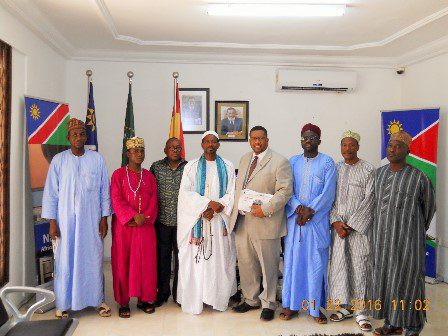 The Spiritual leader of Tijaniyya Muslim Council of Ghana Sheikh Abul-Faidi Abdulai Maikano last week Friday led a delegation to pay a courtesy call on the Namibia High Commission to Ghana Mr Charles B Jacob as part of his activities to strengthen the Council’s international with other countries. The High commissioner praised the Tijaniyya Council for the good work it is doing most especially the recitation of Qur’an for Ghana, Africa and the world at large for peace and development.

Mr Jacob said although his country has 90 percent of Christian population, it does not discriminate among the religions. But, work with all of them to maintain the unity and peace in the country.

He assured his outfit’s collaboration with the Tijaniyya Muslim Council to do more outreach programmes to help promote peace and unity across the continent.

Sheikh Khalifa Maikano thanked the ambassador for the warm reception accorded him and his entourage and prayed that the collaboration between the two bodies will be very mutual and fruitful.

He also expressed his optimism that the mutual relationship will grow from strength to strength to benefit mankind.

The Public Relation Officer of the Council Abubakr Baban Yara, gave account of the Council, on what it stands for and also expressed its readiness to work hand in hand with the Namibians.

He added that the Council need more collaboration to enable it consolidate its effort in assisting the youth to acquire Skills training and entrepreneurship.

The Deputy Head of Mission at the High commission Gabriel S. Kakeke Shaanika enquired about the meaning of Jihad in which he made references to some unfortunate happenings around the globe in the name of Islam.

The President of the Council explained that, some people misconstrue its meaning and application and go to the extreme. But, rather Jihad means a struggle or an effort to achieve a un-compulsion positive result in the spread of Islam.

He was there in hounoring of an invitation extended to him to participate in the celebration of life of Sheikh Ahmad Tijani.

Sheikh Ahmad Tijani is the initiator of world Tijaniyya who led a life worthy of emulation.

In his sermon the Shekh Khalifa Maikano entreated all to be law abiding citizen and desist from anything possible of disturbing the peace of the country is enjoying.

He also advised all the need for upholding justice and fairness.

The National Speaker of the Council Shiekh Ameer Abdul Mumuni gave short narration Sheikh Abdulai Ahmad Maikano Jallo and prayed for the success and guidance of Allah for all. The Juma’a prayers was part of activities proceeding the grand celebration.