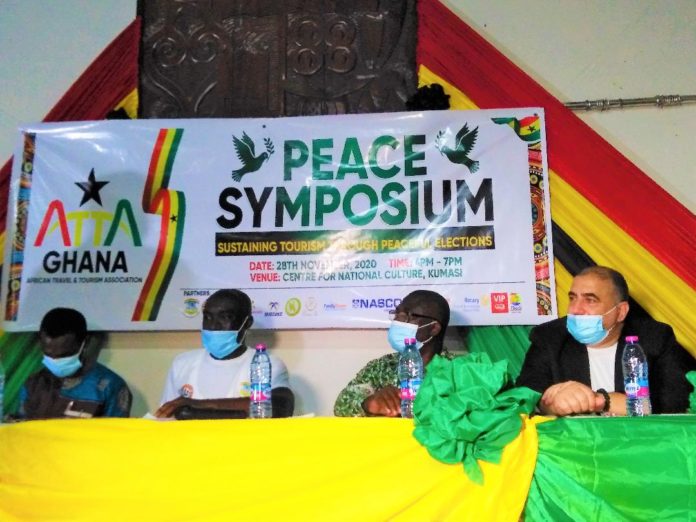 Mr Ahmed Naamann, a founding member of the African Travel and Tourism Association (ATTA)-Ghana, has rallied stakeholders in the tourism industry to be actively involved in the campaign for peaceful elections.

“Our desire is to enhance Ghana’s image as an ultimate peaceful African destination of choice. “The onus, consequently, lies on key stakeholders in the industry to put a premium on issues that promote unity, social cohesion and peaceful co-existence,” he stressed.

Mr Naamann, a former Ashanti Regional President of the Ghana Tourism Federation (GHATOF), was speaking to the Ghana News Agency (GNA) on the sidelines of a peace symposium at the Centre for National Culture (CNC), Kumasi.

“Sustaining Tourism through Peaceful Elections,” was the theme for the programme, which was organized under the supervision of the ATTA-Ghana.

The peace symposium had the objective of deepening understanding of the respective roles and duties of the citizenry towards incident-free and fair elections.

It aimed at highlighting the effects of successful polls on the tourism industry, and contributions of the key industry players to fostering peace before, during and after the elections. Mr Naamann indicated that “our destiny lied in our own hands as a nation.”

It was incumbent on the people, he noted, to avoid utterances and other practices which could dent the image of the country as a “peaceful hub amongst the comity of West African nations.”

Mr. Emmanuel Boateng, President of the ATTA-Ghana, reminded stakeholders that there could not be any meaningful development and growth in the tourism industry without peace.

Tourism, he said, thrived on peace, citing how visitors needed a harmonious environment for new life experiences.
“Peace is the cornerstone of travel and tourism, and also essential to socio-economic growth. We must as such strive to understand the intrinsic relations between the tourism sector and global peace-building efforts.”

The Reverend Sheriff Ahmed Sadick Boateng, a Minister of the Liberty Baptist Church at Buokrom-Junction, Kumasi, appealed to the citizenry to take a cue from the mayhem that befell some African countries due to electoral disputes and violence.

It is a trade association promoting tourism to Africa from all corners of the world.