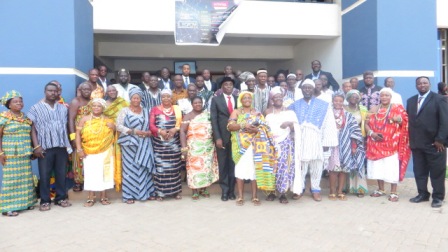 Prof Amartey made the appeal on Monday at the opening of a workshop for paramount and divisional chiefs, queenmothers and staff of Traditional Councils, Regional and National Houses of Chiefs.

The five-day training programme is being organised by the Otumfuo Centre for Traditional Leadership (OCTL) at the UPSA.

The participants would be educated in the areas of Land Administration and Management, Conflict Resolution and Gender issues.

The OCTL, which is one of the four Centres of Excellence, was established by the UPSA, to spearhead the development and modernisation of the chieftaincy institution.
The first batch of participants to be trained by OCTL graduated in May, 2015.

Prof Amartey said the Centre since its establishment a couple of years ago; continue to equip traditional leaders and staff of the Traditional Councils, Regional and National House of Chiefs with effective leadership and management skills towards the sustainable development of their communities.

He said this mission was being pursued primarily by convening workshops and conferences for participants.

Prof Amartey used the opportunity to share with the participants the success story of Nana Opoku-Ampomah, a traditional ruler and the Founder and first Director of the Institute of Professional Studies (IPS), now the UPSA.
He said Nana Opoku-Ampomah is an educationist, businessman, and Paramount Chief of Amoafo-Bekwai in the Ashanti Region.

“With meagre resources, Nana Opoku-Ampomah fought against all odds — at a time when the development of the institute was fraught with many challenges — to ensure that his dream did not die. That vision and the tenacity of purpose, spurred others on after him, who held on to the vision to make the institution what is today,” the VC said.

“In recognition and appreciation of his contributions to improving the lives of Ghanaians through education, the University Council has therefore decided to award Nana Opoku-Ampomah with an Honorary Doctorate degree at a Special Congregation ceremony to be held on 25th April, 2018.”

He said Nana Opoku-Ampomah’s courage and determination to change society through education, should serve as an inspiration to us all.

Lepowura Alhaji Mohammed Nurudeen Dramani Jawula, the Consulting Director, OCTL, said the Centre since its establishment some few years ago had training over 120 traditional rulers throughout the country, with most of them in good standing.
He said the Ministry of Chieftaincy and Traditional Affairs and the Ministry of Local Government and Rural Development, had both shown interest in the Centre’s activities; declaring that both ministries had promised to sponsor the activities of the Centre from time to time.

He urged his fellow chiefs to promote education in their traditional areas, as part efforts to accelerate the nation’s socioeconomic development.

Some participants at the workshop testified of how attending previous editions had enhanced their performance as traditional rulers, especially in conflict management and dispute resolution.

Togbe Gabusu, the Paramount Chief of Gbi Traditional Area, said the participation in previous workshops had enabled him to resolve the Hohoe-Zongo conflict amicably.

He suggested that getting traditional rulers from conflict areas such as Alavanyo and Nkonya in the Volta Region to participate in the OCTL workshop would go a long way to help them resolve the conflict between them amicably.
Mamaga Otubea, the Queenmother of Nkonya Traditional Area, said participating in the programme had empowered her in the resolution of disputes among her subjects.

Daasebre Dr Amankona Diawuo II, the Omanhene of Berekum Traditional Area in an interview with the Ghana News Agency said the workshop was an eye opener for traditional rulers.

He said it would help them to gain more knowledge on how to govern their traditional areas and how to bring development to their people.