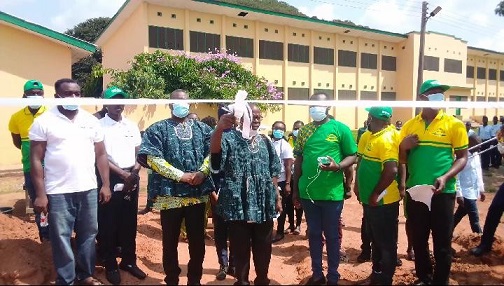 The Ghana Secondary School (Ghanass) Old Students Association (GOSA) 2000 year group has cut the sod for the construction of a Gh120,000 multi-purpose cafeteria for the school.

The project expected to be completed in four-months is part of the 20th-anniversary homecoming celebration of the GOSA 2000 year group to give back to their alma mater.

It is being funded by personal contributions from the group members.

Mr Charles Annan, the coordinator of the 20th-anniversary activities, indicated that the cafeteria had already been identified by the Students Representative Council (SRC) but could not progress hence the GOSA 2000 year group decided to take it over to complete it for the school.

He said about 60 per cent of the total cost of the project was ready from personal contributions of their members and other fundraising activities and appealed to all the 2000 year group members to come on board to complete the project on time.

Mr Annan explained that the cafeteria would serve the students, staff and visitors who came to the school and could be used as a venture to raise internally generated funds for maintenance and other works and thanked the school administration for the support.

Mr Jacob Afful, Headmaster of the school, thanked the group for their foresight and expressed gratitude to the entire GOSA year groups for their immense support to the group of the school over the years.

Later, the GOSA 2000 year group as part of their 20th-anniversary homecoming celebration donated a cow for the school’s kitchen and joined the students at the dining hall for a lunch party.

New office to be built for Obuasi Divisional Police Command