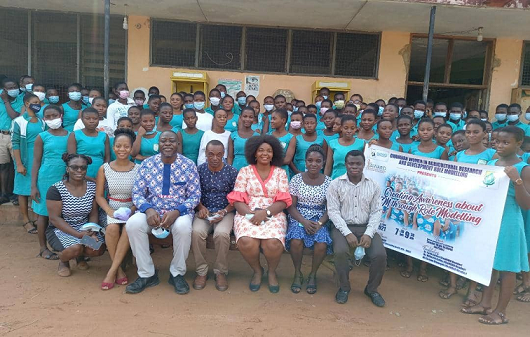 The Ghana chapter of the African Women in Agricultural Research and Development (GhaWARD) has organized a role modelling event for final year students in the Hohoe E.P Senior High School.

The event was led by Dr Faith Agbozo and Ms Senam Klomegah, alumna of the African Women in Agricultural Research and Development (AWARD) fellowship programme and members of GhaWARD.

Dr Faith Agbozo, Lecturer, School of Public Health (SPH), University of Health and Allied Sciences (UHAS), disclosed to the Ghana News Agency (GNA) that the programme was aimed at sensitising the students on the study, career paths and research opportunities available in Science, Technology, Engineering and Mathematics (STEM) which they could pursue.

She said it would also stimulate an interest in STEM among the younger ones at the senior high level and also demystify misconceptions and prejudice about Science, Technology, Engineering and Mathematics.

Dr Agbozo noted that the engagement would inspire the students to take up subjects in Agricultural Research and Development and its related fields, which many people deemed not to have prospects but “which is where the world is actually moving to in the face of climate change and food insecurity.”

She said their expectation was to initiate a conscientisation process among the students to become motivated to learn hard and be encouraged that “life presents opportunities to those who work assiduously irrespective of one’s background.”

The Lecturer said they would sustain the engagement and extend it to other second-cycle institutions in the Municipality as part of the University’s community service.

Ms Senam Klomegah, an Assistant Lecturer in the same institution, also disclosed that the interaction enabled them to serve as mentors and guide the students in deciding their career paths in STEM.

She said mentorship was crucial to academic and career success and helping the students to identify mentors in areas they intended to advance their education and profession was a catalyst to encourage them to achieve their goal in life.

Professor Francis Zotor, Head of Community Health Department, School of Public Health, UHAS, emphasised that allaying fears and apprehensions about STEM was necessary if students were to reach their dreams, adding that “the things you fear are illusions appearing to be real.”

He spoke on the theme: “Standing on the shoulders of giants”, and urged the students who met the requisite qualification to enrol at UHAS to meet “giants” on whose shoulders they could stand on to study and explore the world.

“In UHAS, we mentor our students, give them opportunities and insights into their fields of study so that when they graduate, they can specialise and be employable anywhere in the world.”

Dr Isaac Agbemafle, a Lecturer at SPH, UHAS, said it was important for the students to identify available career paths in STEM because the common belief was that offering science at the senior high school level was all geared to going to medical school and becoming a doctor.

“In fact, life sciences generate 7 per cent of jobs in comparison to 27 and 51 per cent in the engineering and computer sciences respectively.”

He said there was the need to reorient students’ minds to be receptive to other emerging and less explored areas in STEM and guide them to identify future professions and navigate the process.

Dr Agbemafle noted that STEM fields are rewarding since it made students organised, creative, problem-solver, and team player and hence should not be seen as a male-dominated field, difficult or for highly intelligent students.

Mr Prosper Kofi Tedoku, Assistant Headmaster Administration, HEPSS, commended the UHAS and GhaWARD team for the insight given the students on STEM and the academic pursuits and appealed for subsequent engagements with the lower year groups.

He urged the students to take their studies seriously and ensure that lessons learnt from the interaction direct their educational and career pursuits.