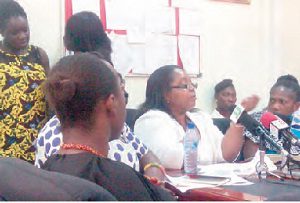 From left: Eunice Sackey and Dr Gloria Quansah,Deputy Director of the GHS at the meeting

The Ghana Health Service (GHS) has begun this year?s World Breastfeeding Week (WBW) campaign with a call for an improved breastfeeding practice among mothers.

The service revealed that there has been a decline in the rate of exclusive breastfeeding due to a number of unconfirmed reasons.

Mothers resuming work shortly after birth, the increasing advertisement of baby foods and mothers not knowing how to express breast milk for their children are some of the causative factors in the decline of breastfeeding practice.

However, it was also disclosed that improving breastfeeding by adhering to the exclusive breastfeeding recommendation alone could reduce infant mortality by about 13 percent.

?Research finding from Kintampo Health Research Centre shows that one million infant lives could be saved by starting breastfeeding within one hour of birth,? Eunice Sackey, National Coordinator of WBW, stated.

She was addressing a media engagement as part of preparations towards the 2014 breastfeeding week themed: ?Breastfeeding, A Winning Goal For Life? in Accra.

The World Breastfeeding Week (WBW) is a week set aside by the GHS to draw attention of the public on the importance of stepping up action to protect, promote and support breastfeeding as a key intervention in the MDGs and post 2015 era.

Breastfeeding and the MDGs

Ms Sackey said the theme for the celebration responds to the current Millennium Development Goals (MDGs) countdown process by asserting the importance of increasing and sustaining the protection, promotion and support of breastfeeding after 2015.

She said breastfeeding is linked to the achievement of the eight MDGs in one way or the other.

?Exclusive breastfeeding and continued breastfeeding helps to improve maternal mortality by decreasing bleeding after delivery and facilitating the delivery of the placenta. It also reduces malnutrition which is liked to about 50 to 60 per cent of under-five mortality,? she said.

The WBW Coordinator, however, noted that there are still some challenges in meeting the MDGs as under nutrition continues to affect about a quarter of all children globally and only a half of all pregnant women in the developing world receive the recommended minimum of four ante-natal visits.

She, thus, called on all stakeholders to join the effort of stimulating the interest and relevance of exclusive breastfeeding.

Ms Veronica Gomez, an Infant and Young Child Feeding (IYCF) Consultant, took the media through some challenges of breastfeeding and how to overcome them.

She said mothers do not have to conclude that their children are not having enough breast milk when the baby cries more or when the baby feeds more than she has time for.

She, however, admitted that there are certain instances where mothers do have genuine cases that need the assistance of a health professional.