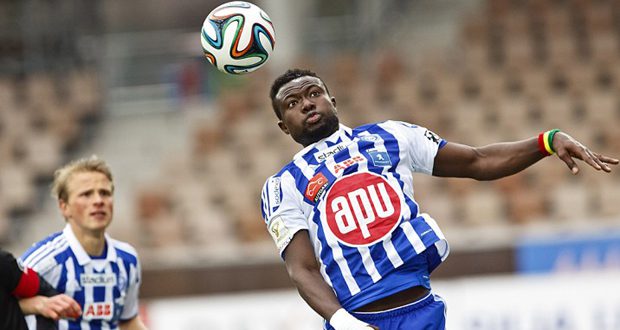 Highly rated young Ghanaian defender Gideon Baah was a delight to watch despite his sides 2-0 defeat to English giants Liverpool.

Goals from Divock Origi and Brazilian sensation Phillipe Coutinho ensured Liverpool rounded up their Preseason games ahead of the English league opener with a comfortable 2-0 win.

But Ghanaian youngster Gideon Baah who is seen as a rising star in European football would have left a lasting impression on Brenden Rodgers after proving key in denying the Reds more joy in the game.

Baah was at the right place on the 34th minute to clear off a goal bound header from Liverpool center back Dejan Lovren.

He also pulled off a great sliding tackle to deny striker Danny Ings a clear chance through on goal.

Liverpool will begin their league season against Stoke on the 9th of August and on the evidence of the game against the Finnish Champions they should sail through.