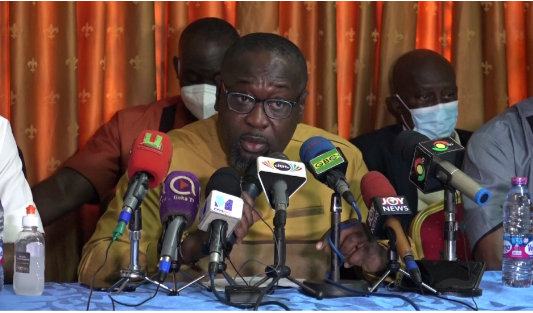 The Ghana Institute of Freight Forwarders (GIFF) has bared its teeth at Shipping lines operating in Ghana’s Ports over what they describe as illegal and outrageous charges.

They have vowed to embark on series of events including demonstrations, picketing among other lawful activities to ensure that the impunity is halted.

Addressing the media, the President of GIFF, Mr. Edward Akrong enumerated a number of issues ranging from administrative fees, coded invoices, strange claims on container damage and cargo release processes that result in massive delays adding up to cost to the importer.

He said some Shipping Lines have blatantly resorted to unwarranted deductions from Container deposits made without recourse to the trader “all in the name of frivolous reasons of container damage which they can only verify.

“Interestingly, they decide on their own without any independent checks as to how the so-called damage was done and when it was done and arrive at their own cost to the importer. These charges are unreceipted,” he said.

He averred that the refusal of the shipping lines to release cargo 24/7 in tandem with the customs breaks the clearance cycle and increases cost.

According to him, the administrative fees charged by the Shipping lines ostensibly for local work done to release cargo to client is untenable since the importer had already paid his freight at the Port of loading.

“This fee had legitimacy at the time when the state’s capacity was low for which reason they had to augment service delivery through provision of logistics. This fee has become ever increasing and bizarre in quantum even after the state had resolved the capacity issues with GPHA and MPS at full throttle,” he said.

Mr. Akrong said it was illogical for a Shipping Line agent to begin counting free days for the trader when the cargo is not at the disposal of the trader’s agent.

“For the shipping lines to intentionally begin the count sometimes when the vessels are at anchorage when the vessel has not fully discharged at the Port smacks of every other thing but fairness,” he averred.

He stated that some invoices issued by the Shipping Lines are not clearly worded, making it difficult to for importers and their agents to understand the actual fee being charged and for what reason.

Mr. Akrong wondered why a shipping line charge fees for online payments which rather saves them cost and time.

Customs To Improve Time Of Clearing Goods At Ghana’s Ports

All Central Region Prisons Are Operating Below Capacity – PRO Reveals