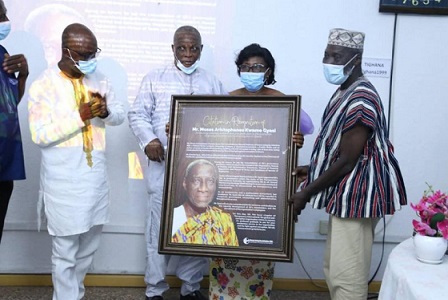 The Ghana Integrity Initiative (GII), a non- governmental organisation has honoured Mr Moses Aristophanes Kwame Gyasi, its immediate past Board Chairman for his contributions to the organisation.

Mr Gyasi is a Retired Senior Lecturer, University of Ghana, a Chartered Accountant, a prolific writer and an author of seven (7) books on accounting, auditing and anti-corruption.

As a recognition of his contributions, the new Board presented a citation, and a brand new laptop to Mr Gyasi, with an accompanying citation that read: “Mr. Kwame Gyasi joined GII as a Board member in October 2003 and was later elected as the Chairman of the Board, a position he held until 2019 when his tenure expired.

During his tenure, he led the consolidation of GII’s governance processes which resulted in the revision of GII’s Regulations, Manual of Policies and Administrative Procedures, Manual of Financial Regulations and Manual of Terms and Conditions of Service of Employees.

As an academician and a professional accountant ‘par excellence’, Mr. Gyasi did not withhold from GII his expertise in corporate governance, accounting and administration throughout his service.

Mr. Gyasi will also be remembered for his immense contributions to the capacity development of GII’s stakeholders and the recruitment of the organisation’s employees.

“Mr. Gyasi will also be remembered for his immense contributions to the capacity development of GII’s stakeholders and the recruitment of the organisation’s employees.”

Mrs Linda Ofori-Kwafo, Executive Director of GII said Mr Gyasi was audacious in his criticism of governments with regards to corruption issues.

“From his background of serving on several boards like GETFUND and being a lecturer in accounting and lecturing in the School of Administration for long, we realised that we could tap from his knowledge to support the organisation,” she said.

She said it was under his leadership that she was elected first African Woman to the Board of Transparency International, an achievement they did not take for granted.

She said Mr Gyasi had helped the organisation to be well established by putting together a good organisation that would be able to work effectively.

Mr Benedict Doh, Accounts Manager who read a speech on behalf of the staff of GII to express their gratitude to Mr Gyasi commended him for the exemplary and selfless leadership that he had demonstrated during his tenure.

He said Mr Gyasi was approachable and friendly, and had related well to all regardless of their levels within the organisation.

“Our welfare was your major concern, so you made sure ‘conditions of service’ which was manually written was adopted by the organization.

“We remember how you will always buy and present gifts to staff members anytime you get the opportunity to travel outside the country,” he said.

He said as a great leader and believer of the ideals of democracy, Mr Gyasi gave them the opportunity to express their views even if they were at variance with his position.

Mr Gyasi said he was happy that GII had recognised his work, and expressed hope that the fight against corruption would continue.

“The fight against corruption is strong and there are dangers as well and advised the organisation to build structures and get people who could manage it effectively.

Ghana Integrity Initiative (GII) the local chapter of Transparency International (TI) formed in December 1999 is a non-partisan, non-profit civil empowerment organization focused on the delivery of the essential themes necessary for the creation of a National Integrity System.

The GII is an advocacy organization dedicated to fostering public awareness on the fight against corruption.