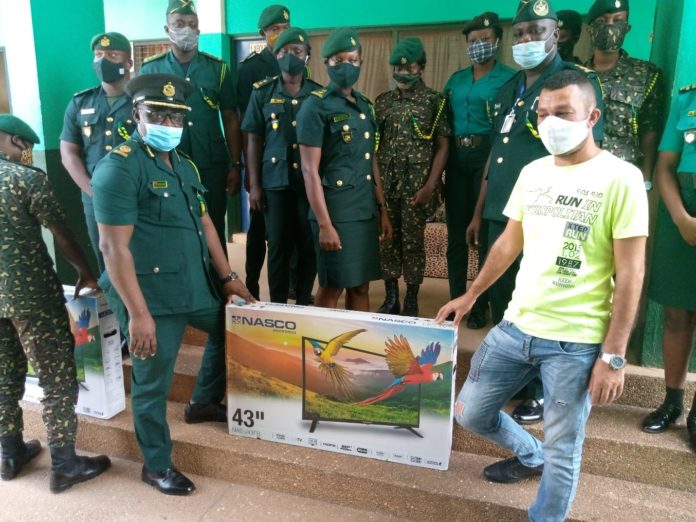 The Service said such drivers when arrested, would be prosecution.

Drivers, the Service noted, must rather support it to clamp down on foreigners who used unapproved routes to enter the country, to stem the spread of the Corona Virus Disease (COVID-19).

Chief Superintendent Henry Duku Ackah, the Deputy Bono Regional Commander of the GIS, made the appeal when LGG Construction Company Limited based in Accra, presented two 43 inches flat screen television sets to the Service in Sunyani.

Chief Supt. Ackah emphasized that Ghana‘s borders were still closed, as part of measures introduced by the government to control the spread of the pandemic, saying drivers who would assist foreigners into the country unlawfully would be prosecuted.

He expressed regret that despite intensified public education and the restrictions in place, some commercial drivers aided foreigners through unapproved routes to come to the country.

This situation, Chief Supt. Ackah said were thwarting government’s efforts in ensuring that no COVID-19 case was imported into the country, adding that, the GIS had also heightened surveillance and any driver who would be caught would not be spared.

Assistant Commissioner of Immigration (ACI) Yaw Bediako, the Bono Regional Commander of the GIS, thanked the company for the patriotic gesture and advised the populace to adhere to the COVID-19 directives, restrictions and protocols to prevent its spread.

Mr. Jnad Louay, the Director of the LGG Construction, told the Ghana News Agency (GNA) the presentation was in line with the Company’s social responsibility to give back to society.