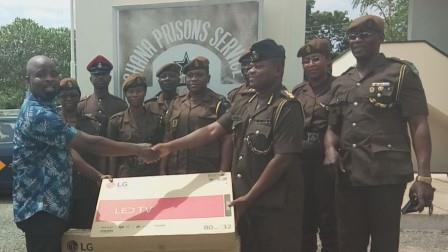 “We are the officers who have to control ruthless, mean and violent crime offenders without weapons”-Anonymous.

Few weeks ago, the Ghanaian internet space was flooded with commendations for officers at the Kumasi Central prison for the arrest of a woman who came to visit her boyfriend with soup concealed with suspected Indian hemp and tramadol

The role of the prison officer in law enforcement can never be downplayed in our part of the world where conditions aren’t favourable.

The incident that happened at the Adum prison is just a minute part of the good works being executed by the gallant men and women in brown.

The other prison officer who needs a thumbs up is the one who works at a camp or open camp prison facility with or without fencing but is able to safeguard prisoners and reform them to reintegrate into the society.

He’s that officer who vigilantly not less than 2,000 prisoners at a central, medium or maximum facility 8hrs each day.

Not for the faint hearted.

Give a high five or doff off your hat to that smart female officer in brown who executes the same task as her male compatriots; reforming and rehabilitating female prisoners in her own professional way amidst the high risk involved. She took a job that her mates even feared to get close to its enlistment forms.

The officer in brown needs thumbs up for being able to keep vigil over hardened criminals, keep them in check without infringing on their basic human rights for public safety sake.

Have you ever thought of how an officer in brown is able to escort four or more able bodied prisoners in town and secluded areas without arms, yet he or she is able to control them without breaching security? yes that’s how far the officer in brown goes to make sure you have a sound sleep.

The officer who sits in from 6am to 6pm when there’s an emergency or shortage of officers, does that, not for an overtime stipends or favor but for the betterment of the country and safe custody of prisoners and public safety.

Some of us wouldn’t rule out the fact that, there are bad nuts among us but that also shouldn’t overshadow the good works being executed by other gallant ones who sacrifice their time and families for public safety and safe custody of prisoners.

Always say a prayer and a thank you to that prison officer who is a nurse but decided not to work in the ward but the prison infirmary, the professional teacher who loved to teach prisoners and opted out of the normal classroom, the psychologists, counselors and other professionals who would’ve opened their consultancy services but decided to join the gallant men who will stay with the society’s outcasts and help them to re-integrate back into the society, reformed and rehabilitated.

Whenever you see a prison officer, get close, stretch a hand and say thank you sir/madam for keeping our society safe.

The writer is a Second Class Officer with the Ejura Settlement Camp Prison; and can be contacted on [email protected]/0249-542-342.