The Competitive Cashew initiative (GIZ/ComCashew) and Olam Ghana have organised an upskilling training programme on cashew apple-based products for 30 women in agriculture in the Techiman District.

It was organised in partnership with the Women in Agricultural Development (WIAD) of the Ministry of Food and Agriculture (MoFA), with funding from the German Federal Ministry for Economic Cooperation and Development (BMZ) and the Swiss State Secretariat for Economic Affairs (SECO).

Held at the Business Advisory Centre at Techiman, the training equipped 30 women with skills on varied recipes such as juice, kebabs, cashew apple burger, Moqueca – a Brazilian dish, and marmalade of cashew apples.

The programme’s main objective was to empower the women to develop cashew apple-based products and present an opportunity to maximise their use in the communities to generate some income.

Cashew apples are currently underutilised in Ghana and often going to waste in the fields, a statement from the organisers said.

Meanwhile, they are an excellent source of vitamin C, A and B and high in antioxidants and minerals such as iron, calcium, and mineral salts.

Madam Juliana Ofori-Karikari, Portfolio Manager for SECO at ComCashew, at the opening ceremony, re-emphasised the position of women in cashew farming and why it was important to empower them through such trainings, the statement said.

“Do you know that women form more than 80 per cent of the labour force involved in collecting raw cashews from the farm?

“However women ownership of the farms is estimated at less than 10 per cent. This should not be the case. We believe with such trainings we will soon be seeing many more women managing big cashew enterprises and factories”

Olam Ghana has worked in the cashew industry of Ghana under its Edible Nuts Division, making it the leading cashew exporter in the country.

Mr Yussif Amankwa, the Branch Manager of Olam Ghana Edible Nuts, was quoted as saying: “We are, therefore, constantly looking out for ways to improve the lives of the farmers we work with and that of their communities.”

“In line with this, we have rolled out several projects and initiatives that have yielded and continue to yield very positive impact on the communities we work in.”

A tasting session was organised as part of the programme, which gave invited guests the opportunity to try some cashew apple-based products prepared by the women, with the guidance of the trainer, Madam Leila Borges Spitzbart.

Speaking at the tasting event, the CEO of the Tree Crop Development Authority, re-echoed government’s commitment to developing the cashew sector, saying: “I am very pleased with what I have seen and tasted today.

“I knew of other by-products like the drinks but not the sauce and burger. As the CEO of the TCDA, we are mandated to regulate and develop the value chains of six crops, with cashew being the number one crop.”

“We will do all we can to ensure that cashew farmers reap the benefits of their produce… As long as Olam and ComCashew are partners, the Authority will also support any project they embark on.”

Madam Rebecca Asantewaa, who represented WIAD, said: “This training is very important to us because it saddens our hearts to see cashew apples being wasted at the farms. We are not only training these women and sitting back but we will follow up to see the success stories from this training.” 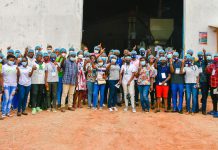 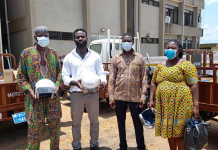 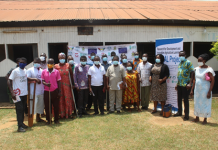 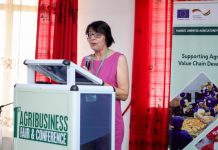