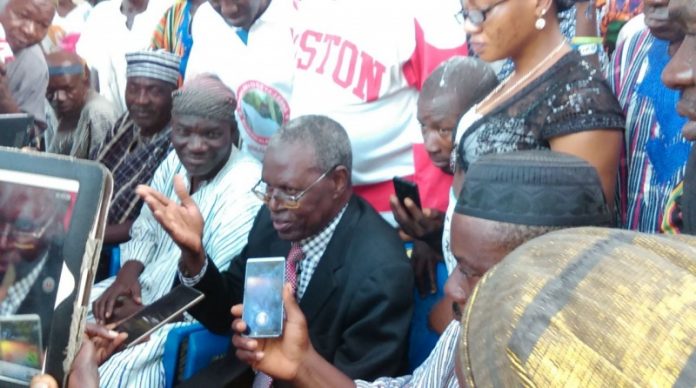 The Regional Chairman of the Ghana Journalists Association (GJA), in the Upper East Region, Mr Eric Kwadjo Amoh has called on government to consider forming a Committee of Eminent Chiefs to help resolve the longstanding Chieftaincy dispute in Bolgatanga.

Mr Amoh, who made the appeal on behalf of his colleagues, indicated that the “protracted” chieftaincy dispute had significantly created indiscipline in the Bolgatanga Municipality and retarded development of the region as the regional capital.

He therefore proposed to government to arrange to involve eminent people including; Chiefs who could work together to find lasting solutions to the dispute to promote the peace and development of Bolgatanga and the region as a whole.

The Chairman made the appeal during a press soiree in Bolgatanga organised by the Upper East Regional Coordinating Council (RCC).

The occasion, which coincided with the 100 days in office of Madam Paulina Patience Abayage, the Upper East Regional Minister, was the maiden encounter of the Minister with the media in the region.

The event, which brought together other stakeholders including; heads of departments, some Municipal Chief Executives (MCEs), members of the Regional Security Council and some security services, afforded the Minister the opportunity to account for her stewardship and spell out government projects and interventions being implemented in the region and respond to concerns from the journalists.

The Bolgatanga Chieftaincy dispute has been long and lingering even though the parties involved had sought to address the issues in court.

The issues are often going back and forth giving space for clashes and leading to several deaths, destruction of property and injuries.

This, Mr Amoh indicated, had bred recalcitrant attitudes among people in the traditional area and partially stalled development prospects in the Municipality.

He applauded to government to use similar formulae it used in settling the Dagbon Chieftaincy dispute through the formation of the Committee of Eminent Chiefs.

He said same could be replicated to find mutual understanding and peace agreements to the Bolgatanga Chieftaincy dispute notwithstanding what is pending in court.

The Chairman cautioned the Regional Minister to continue to operate open door policy in order to deal with security issues in the region to bring about development and improvement in the lives of the people.

Madam Abayage underscored security issues as priority in her administration and called on all stakeholders, especially the media to assist her to promote peace through their reportage and influence.

“Since I assumed office, I have worked to among other things promote peace and security,” the Regional Minister stated.

“I have been taking security briefings from the heads of security, and the periodic and emergency REGSEC meetings we have been holding are to ensure that there is peace and order at all times in the region.”

The Regional Minister charged the media in the region to expose any individual or group of individuals who attempt to destabilise the peace and development the region was enjoying and urged them to uphold professionalism and ethical standards while pursuing their role as fourth estate of the realm.