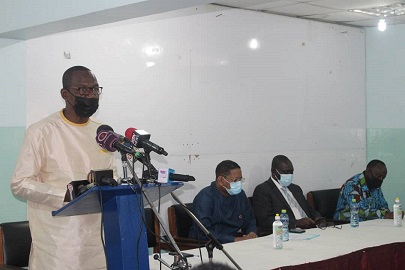 Mr Roland Affail Monney, the President of the Ghana Journalists Association (GJA), has called for zero tolerance for impunity in any shape or form against journalists ahead of the December general election.

He warned that anything contrary to that, would have unthinkable consequences for the entire country, stressing on the crucial mandate and role that journalists played in the democratic dispensation and in upholding the fundamental human rights and justice of all.

Mr Monney made the call when the GJA in partnership with UNESCO and other stakeholders, on Monday, held a forum in Accra, to mark the International Day to End Impunity for Crimes against Journalists.

He said the Day, November 02, each year, was set aside by the United Nations to draw attention to the low global conviction rate for violent crimes against journalists and media workers, currently estimated at only one in every 10 cases.

The GJA President said statistics by UNESCO, showed that 1,200 journalists across the globe were killed between 2006 and 2019 in line of duty, a staggering figure, which excluded those, who repeatedly suffered torture, enforced disappearances, arbitrary detention, intimidation and harassment in both conflict and non-conflict situations.

He also cited other crimes such as sexual assaults on female journalists in particular, saying the impunity was to blame for Ghana’s continuous slip on the league table of free media systems in the world, which threatened to dim the beacon of the country’s democracy.

The GJA president said “Impunity breeds impunity,” which could ignite a self-propelling and re-energised cycle making it extremely difficult to uproot, because the crime unpunished, could embolden perpetrators to attack journalists more and more, and further exert a significant chill on press free freedom.

Mr Monney said Ghana, which was a reference point and standard measure for free speech and media freedom in Africa, had unfortunately recorded a few disturbing cases of attacks against journalists, headlined by the assassination of Ahmed Suale of Tiger Eye fame, in the most tragic circumstances last year.

An initial police announcement of several arrests made in connection with Suale’s murder, and the subsequent assurance by President Nana Addo Dankwa Akufo-Addo last week, gave a glimmer of hope that justice would be done, he said.

However, “given the President’s fidelity to the rule of law and affinity for the media, we are inclined to believe that the arrest will eventually happen and prosecution will naturally follow,” and if found guilty, the killers must be punished to the fullest extent permissible within the law, saying “this would be the greatest antidote for the cancerous spread of impunity in Ghana”.

Mr Monney insisted that the commemoration of the Day, should not be a mere act of symbolism, but should exact iron-clad commitment from all stakeholders to confront the issues of impunity with utmost audacity, ferocity and tenacity regardless of who the offenders were.

“We remind the law and order community in particular that a critical element of rule of law is confidence in the law. Confidence in the law should therefore not wobble but double, relative to dealing with attacks against journalists,” he said.

He stated that in a robust media system “Such as in ours, anti-media brew will continually bubble as long as the journalists shed light on dark sports and hold people in positions of power to account,” hence the GJA expected democratic institutions, which were nourished by the media to demonstrably and stridently rally to the defense of journalists in their difficult moments.

Like the counselling session for the proverbial cat and stinking fish, journalists were also being cautioned to avoid any nasty breach of values, which underpinned the profession, and which in some regrettable instances led disgruntled people to attack them, Mr Monney said.

The GJA President said it was hoped that a better report would be given next year on the physical conditions and psychological well-being of journalists in Ghana and their colleagues in other parts of the world as they went about their duties unafraid and unintimidated.

Mr Abdourahamane Diallo, the Country Director, UNESCO Ghana, said the high rate of murder of journalists was unacceptable considering the crucial role they played in bringing truth to light, saying between 2010 and 2019 alone, close to 900 journalists were killed while doing their job.

He said more than 150 killings happened over the last two years, majority of whom were either for investigating corruption, trafficking, political wrongdoing, human rights violations or environmental issues, while others faced threats, kidnapping, arrests, imprisonment and harassments, yet in seven out of eight killings, the perpetrators of the crimes went unpunished,

The COVID-19 crisis, Mr Diallo noted, had also led to new risks for media workers around the world, and called on States to protect journalists and ensure that the perpetrators of crimes against them were punished.

Mr Diallo said UNESCO had trained nearly 17,000 judicial operators and was developing guidelines to assist the International Association of Prosecutors in investigating attacks against journalists, and called for massive stakeholder collaboration in its #EndImpunity campaign to end the impunity against journalists, to root out the crime, advance peace, justice and promote sustainable development.