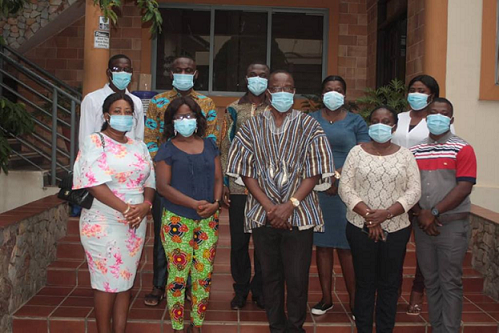 Mr Affail Money, the President of the Ghana Journalists Association (GJA), has charged the media to focus more on human rights issues to highlight infractions on the ordinary citizen and the vulnerable.

“It’s high time the media de-emphasised politics and brought to the fore issues, which affect the fundamental rights of ordinary people and ensure that all manner of persons are treated equally and fairly as far as our democratic dispensation is concerned,” he said.

Being the fourth estate of the realm, the media had the enormous responsibility to hold people in position of trust accountable to uphold the rights of all.

Mr Money was speaking at the opening of a training programme at Aburi in the Akuapem South District of the Eastern Region for 20 journalists selected nationwide for the GJA’s project: “Mobilising Media to Fighting COVID-19 (MMFC)”.

The five-year project, with funding support from Global Affairs, Canada, is being implemented by GJA in collaboration with Journalists for Human Rights (JHR) across Africa.

It is aimed at contributing to international public health efforts to combat the spread of COVID-19 and its impact on human rights, placing emphasis on women and girls’ rights across its 12 implementing countries.

Mr Money said the media had come a long way from the days of media oppression to an era where they must uphold their integrity and fiercely guard against unprofessionalism.

They must also resist being appendages to the “powers that be” and rather work in the interest of the masses to shape “our democracy,” he said.

Ms Zubaida Afua Mabuno Ismail, the Ghana Coordinator of the JHR on the project, said it was also being implemented in other African countries and called on participants (mentees) to live up to expectation.

She explained that the 20 participants were mentees who submitted human rights story pitches they wanted to pursue under the guidelines of the project and reminded them of their responsibility to meet their targets.

Mrs Linda Asante-Agyei, the Vice President of the GJA, who took participants through Human Rights and Gender Reporting, expressed optimism that the objectives of the project would be achieved.