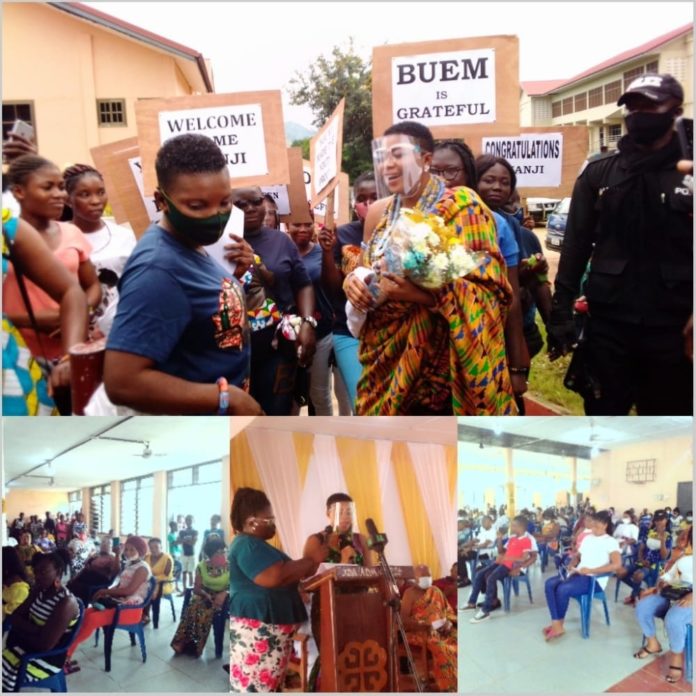 The project would also empower teenage mothers, who had dropped out of school as a result of pregnancy to become productive.

Ayanji addressing a durbar of chiefs and people of Jasikan to welcome her after she was evicted from the show said the projects under the “YAAF Foundation” would offer a helping hand to the less privileged in society adding that, “a society grows better when the mentor-mentee relationship is enhanced.”

“The fate of thousands of Ghanaians living below the minimum wage who need legal representation continues to hang in the balance because of the dire state of the Legal Aid Scheme, meant to provide legal assistance to such persons.”

She said most youth were enveloped in the intoxicating and captivating shackles of alcoholism, trapped in the seemingly inevitable cobwebs of marijuana, drugs, and tobacco and importantly teenage mothers’ neglect influenced her choice of the project.

Ayanji said the Foundation would develop capacity building and skills programmes that would enhance and empower teenage mothers and drug addicts with the recovery process.

She said the Foundation would also provide private legal assistance to the needy and individuals who had been denied access to justice due to financial constraints.

The Contestant expressed gratitude to the chiefs and people of her region and the organisers of the contest for giving her the platform to exhibit her skills and talents and also called for their support to make the project a successful one.

Madam Angela Yaa Asantewaa Fefeti, Lead Manager of Ayanji’s Team and a legal practitioner said the Contestant would bring on board legal practitioners to make the project a success to augment government’s efforts of providing legal assistance to the citizenry.

She said Ayanji’s aim of providing private legal assistance if supported by all would go a long way to help citizens not limited to the Oti Region but the entire country.

Madam Fefeti called on the people, especially the youth to always take advantage of platforms to project, promote, and protect the region.

Asafoatse Obeng Akyea, who chaired the programme congratulated Ayanji for projecting the region and tasked the youth to emulate her steps and also represent and showcase the region wherever they found themselves.

Mr. Lawrence Kwami Aziale, the Jasikan District Chief Executive (DCE) called for support for young people in the District and the Region as a whole to be able to exhibit their talents and potential.

He said the projects unveiled were commendable adding that, most people especially women would be able to have access to legal representation in seeking justice, which they found difficult.

The DCE presented a sum of GH₵1,000 to support the project.

Ayanji also launched “Face of Oti”, a unisex beauty pageant that seeks to promote and project the culture, tradition, customs, tourism, and good morals of the Oti Region.

She is a practising nurse and a graduate of the Nalerigu Nursing and Midwifery College and has won many beauty pageants shows including “Miss Buem 2014.”