The Peasant Farmers Association of Ghana (PFAG) has rebutted claims by the Chief Executive Officer of the National Biosafety Authority (NBA) that seeds from Genetically Modified Organisms (GMOs) can be planted. 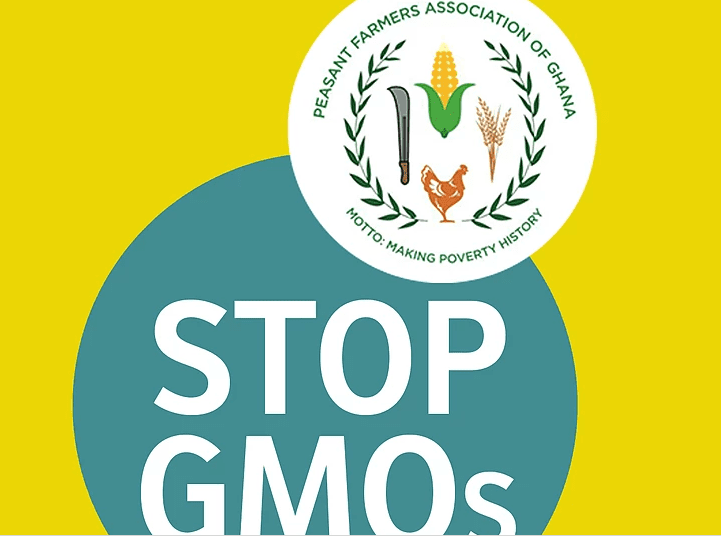 The PFAG, in a statement issued in Accra and copied the Ghanaian Times, said Dr Amaning Okoree “misinformed” Ghanaian farmers that GMO seeds can be planted and replanted.

“This statement is totally erroneous in the sense that, even hybrid seeds planted and replanted again cannot give the expected yields” the association stated; adding that it was disappointed in NBA boss for “desperately deceiving farmers” in his attempt to convince farmers to accept Genetically Modified Foods.

Dr Okoree, the PFAG claimed, at a sensitisation workshop with farmers in Accra to promote GMOs against the will of Ghanaians said that “Ghana is ready to introduce GMOs”

This position, the PFAG said was against the numerous concerns raised by farmers, civil society organisations and the Ghanaian public on the socio-economic, health and environmental dangers of introducing GMOs in Ghana.

According to the statement, signed by Victoria Adongo, Executive Director of PFAG, the declaration of the CEO of the National Biosafety Authority that the country was ready and that GMOs could be planted and replanted were false.

Madam Adongo explained that “GMO Technology protection systems are such that, the developer alters the characteristics of the plants popularly known as terminator genes. This gene renders the seeds produced by genetically modified plants sterile.

“In other words, seeds containing the gene will produce only one generation of plants; farmers cannot, by saving the seeds generated by those plants, produce additional crops in subsequent planting.”

Describing GMO technology as a way to control how the seed is produced, supplied and commercialised, the PFAG said Ghana should learn lessons from the failure of BT- Cotton in Burkina Faso in 2018 where they had to rely on Togo for conventional Cotton seeds to save their cotton industry from total collapse.

On the claim that Ghana was ready for GMOs, Madam Adongo said there was still intense debate among scientists on health implications of GMOs and majority of scientists’ caution nations to be conscious of how they handle GMOs.

“We should be drawing lessons from the effect of Monsanto’s Glyphosate on farmers. This dangerous chemical for years was causing cancer and killing many farmers, yet the company that is leading GMOs claimed at the time that the chemical was safe to use until recently, when a school gardener who is dying of terminal cancer won a law suit against the company” the PFAG boss stated.

In her view, “as we stand as a nation, Ghana has no capacity and resource persons in place to monitor research, development activities and trends of GMOs, conduct risk assessments and examine the full health, environmental and socio-economic implications of genetic engineering and GMOs in Ghana.”

The PFAG was of the belief that accepting GMOs would be an obstacle to the President Nana Addo Dankwa Akufo-Addo’s vision of developing Ghana Beyond Aid because, “farmers will depend on foreigners for seeds, and the one who controls your seeds, controls your sovereignty.”

Some few months ago, PFAG expressed its reservation about the alarming rate at which GMO products were flooding the Ghanaian market irrespective of the negative implications to health and the environment.

The association asserts that, GMOs are dangerous to health, are a leading cause of carcinogenic diseases, threat to environment sustainability and threat to ownership of seeds by local farmers.

Peasant Farmers are constrained by poor rural roads, unavailability of key infrastructure and absence of appropriate information on the right farm inputs and their use.

Financial institutions are also unwilling to grant them loans while high cost of inputs such as seed, pesticides, fertilisers, drugs and vaccines as well as use of outdated technology continue threaten their ability to expand.

These challenges should rather engage our attention as a nation.

It should be further noted that every proponent of GMOs has a connection to the industry in some way, and that ALL independent studies show GMOs have negative results — or, at bet, are not proven to be safe.

Samsung heir sentenced to 2.5 years in prison for corruption